From a Massacre to a Fisherman’s Wharf

IT’S BEEN SOMETHING of a whirlwind week for me – hard to believe that a week ago I was just getting home from the Milwaukee Massacre at the Wisconsin State Fair Park grounds. That’s because just a couple days later I hopped a plane for San Francisco for a business trip, and tomorrow we’ll be driving a few hours north to take my son to the Wisconsin Dells for the first time (Actually, it’s my first time too – so I’m looking forward to playing in the water parks like I was a kid!) 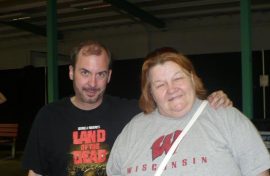 There were homes toppling into lakes in Wisconsin the weekend I was up there thanks to the flash floods going on… and two friends of mine from the area told me they actually had to turn their car around on Saturday when they set out for the Massacre, because the rain was falling so hard they couldn’t see the road (they dropped in to the event on Sunday).

I got to Milwaukee myself without incident and checked into my hotel early Saturday afternoon before heading over to the fairgrounds. On the way, it began to rain… that cleared up for a little while, but by late afternoon it was pouring in earnest and water started seeping into the building the guest and dealers tables were set up in. Milwaukee had tornado sightings and flash flood warnings by the time Dave Benton and Bill Gagliani arrived to hang out at the Massacre for the evening.

Dave packed a cooler of Newcastle and Sierra Nevada Bigfoot Barleywine Style Ale (now THERE’S a headache in a bottle… but good stuff!) which kept us going from 5-10 p.m. Along the way we met TigerLady (pictured above), a mutual friend from MySpace, as well as Scott McCoy, the publisher of Necrotic Tissue e-zine, who staged us in this macho t-shirt promo pose. 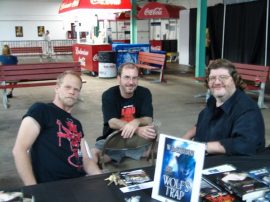 I also met the publishers of Cryptic Magazine (who had a table directly across from mine) and the organizers of the Chicago Horror Film Festival, an event I’ve always wanted to spend the weekend at, but have never quite managed to…that may change this fall (consider this foreshadowing).

Bill and Dave and I signed a few books, emptied quite a few bottles and then headed down the street for pizza when they closed the display table pavilion for the night (meanwhile, in the building next door, Green Jelly was just going onstage).

The next morning, I wondered if I should even head back to the fairgrounds… the rain was literally coming down sideways when I first tried to head out… instead I sat in the hotel lobby and downed a couple cups of coffee until it slowed enough for me to dash to the car. Which brings up a question: Have you ever brushed your teeth in a car with a swig of coffee for moisture? I’d left my toothbrush in the car and once I braved the rain, I wasn’t taking it back to the hotel to use.

If you’re curious, the paste-coffee combo kind of makes for an Irish Coffee flavor… 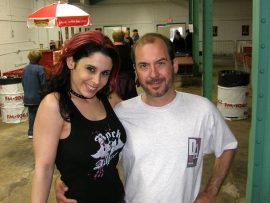 While traffic didn’t pick up too much given the deluge in the early part of Sunday, I did meet a few more horror fans, signed a couple more books and also chatted a bit with the perfect “morning after” photo-op —  Tiffany Tease —  who was there with her “Tease Tutors” giving lessons on pole dancing to anyone interested (the night before she and her tutors served as go-go dancers for a couple of the Massacre’s bands, including Green Jelly).

Unfortunately I had to head home just as the late Sunday afternoon  sun started to dry things off and a few more people started wandering in. But despite the rain, which kept the crowds from ever getting too thick, the Massacre was a fun weekend, and I hope I’ll have the chance to go again next year. 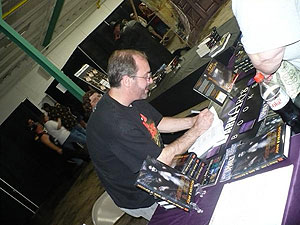 I actually would have loved to have ducked into the film area just behind my table to see one of the indie flicks they were showing… At one point I poked my head through the curtains that walled the film area off from the rest of the convention hall room and the only people in the room watching a Skillsaw growl through someone’s belly on the screen were a couple of cops who got the assignment to walk the con for the weekend. (I can’t put my finger on it, but there was something humorous about that). Maybe next year I can con someone into watching my table for an hour or two!

If you want to see more photos from the event, check out my Photo section on MySpace. Thanks to TigerLady, Tiffany Tease, and Scott McCoy for giving me most of the above photos to post (which, by the way, are clickable, if you want to see larger versions and didn’t realize that before. FYI, the Ghostbusters car and Tattoo Booth folder were taken on my cellphone).

Since returning from the Massacre, I’ve been busy setting up my fall book-signing tour for Covenant, which I’ll be posting about soon (I’ve got a handful of dates nailed down and a number of things that should fall into place in the next couple weeks). I’ve also been setting up a new WordPress-driven blog, which will debut shortly and will be more integrated into my regular website than MySpace (this post is actually being written in the new system), and I’ve been tweaking a new e-newsletter system. If you haven’t signed up for the e-newsletter, check here: www.johneverson.com/newsletter/. 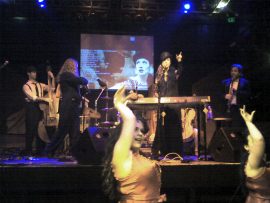 I also spent a couple of days on business in my favorite city, San Francisco.

In a strange bit of synchronicity, just a couple weeks ago, a friend sent me a dark cabaret song from Jill Tracy, called “Evil Night Together” which I totally loved (I’ve had it on my MySpace ever since). When I visited Jill’s MySpace page, I discovered that she was holding a CD release party the very night I arrived in SF.

Naturally, I took a cab from my biz dinner straight to the DNA Lounge to see her and left three hours later with a couple CDs in hand. Jill put on a great show – definitely one of the highlights of the many concerts I’ve seen over the years in SF. Stop by her MySpace page and check out her new CD! 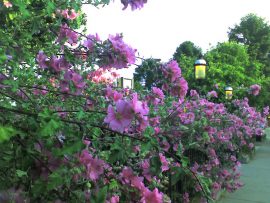 In the too-short couple days I was in SF, I stayed at the way-cool Argonaut Hotel (right off Fisherman’s Wharf), walked throught Ghiardelli Square, did my usual pilgrimage to North Beach to City Lights Bookstore, and stopped in at the San Francisco Brewing Company (but there was some kind of special event going on there, so I didn’t stay).

On my last night, I walked from City Lights through Chinatown (where I picked my son up a hand drum) and eventually ended up at J. Foley’s Irish Pub on O’Farrell Street, which was one of the first places I ever ate at in SF, over a decade ago. 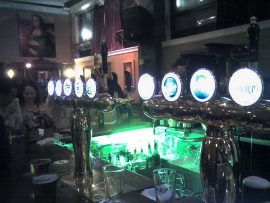 They had Newcastle, so I ended up setting up shop at J. Foley’s and wrote a couple thousand words at the bar on my current novel before heading back across town for a couple hours sleep before catching my plane home.

My only disappointment during my stay was that I wasn’t able to track down one of my favorite SF attractions during the short trip — the mint ice cream It’s It bar. The ice cream sandwiches are only produced in SF, and while I found a vanilla version at a Walgreen’s, the mint version (mint ice cream tucked between two oatmeal cookies and covered in chocolate) are truly “to die for.”  Next time.

As much as I wanted to see my family, I have to admit I hated boarding that plane — I’ve been to a lot of cities over the years around the U.S., and San Francisco is, without a doubt, my favorite. I can’t wait to go back.