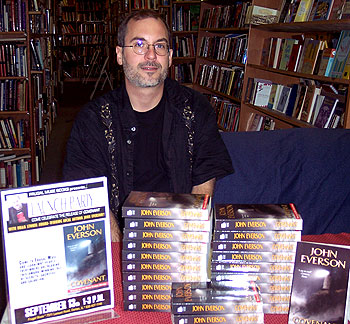 SO, WHILE IT’S NOW been out a couple weeks, this was the “official” Covenant debut party weekend… with a signing staged at the Bolingbrook, IL BORDERS store Friday night just a mile or two from my house, and the “official Launch Party” at Frugal Muse Books in Darien, IL Saturday afternoon, just a few miles down the road.

Thanks to the fallout of Hurricane IKE, it pretty much rained non-stop all weekend (“flooding” was a part of the front page headlines of every newspaper in Chicagoland this weekend) so bookstore traffic was not exactly stellar… but still,  I met at least 20 people in Bolingbrook who took home copies of Covenant, including a doctor and a 17-year-old young writer who came to the store specifically to meet me. It’s always cool to meet a young writer, so I hope, in the end, she enjoys the book!

The Doings, part of a chain of local papers did a nice write-up on the signing tour, which you can read online.

Saturday at Frugal Muse Books, it was kind of a “class reunion” of sorts. People from my work, my wife’s work, my old neighbors, and other friends all dropped in to celebrate the official “launch” of Covenant with me.

The torrential downpours around the area kept some people away, I think, (my wife Geri and I both woke Saturday morning from dreams of a flooded basement — which thankfully didn’t happen to us but was the reality not a dream for hundreds, if not thousands, of people in the area).

Luckily we didn’t have a flooded basement, but after the signing, when a bunch of people came back to the house with us for some pizza and beer… we found that our air conditioning had decided to choke… so while the house wasn’t flooded, it felt like you were breathing water!

Anyway… we made the best of it and true to “kids of the ’80s” form, we used the old turntable in the pool table room to spin LPs by The Hooters and the Pretty In Pink soundtrack.  Kids of the ’80s indeed…

It was a great day with family and friends, and I’m looking forward to next weekend’s stops in Indianapolis and Cincinnati!