A big cruel world… and a hard lesson. Goodbye B.B. 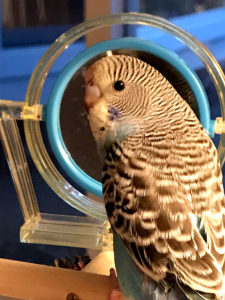 SATURDAY, SEPTEMBER 1, was just like any Saturday. I ran up to the store to get some groceries, and after unloading, I went to take a full bag of garbage out to the garage. And a second later, life took one of those forks in the road that you can’t ever turn back from. As I stepped down into the garage with the bag, our baby parakeet, B.B., shot like an arrow from the cage on the other side of the room and flew right over my head… and out the open garage door.

I dropped the bag and ran down the driveway and across the street after her, tracking her to a tree across our court. She wasn’t too high and my wife Geri brought me a chair. I slowly stood up and reached up to offer her my hand…. and she took off again.

She’s only had her wing feathers grown in enough to fly for a couple weeks, so I was hoping that she’d tire quickly and end up landing low – just flying across the court was a long way! But it was a windy day and she rode the currents fast. She disappeared around the neighbor’s house and landed much higher in a dead tree.

It took a couple minutes for us to spot her… and then I ran back for a ladder. I climbed it and looked at her, urging her to come to me. But I couldn’t reach her and she didn’t budge. So then I ran back home for another long ladder. The super heavy extension roof ladder.

But she launched into the air again before I could get near her.

Neighbors were now helping in the hunt and I tracked her to another yard off the court behind ours and dragged the heavy ladder there (my shoulders and legs still hurt two days later from the frantic running and lugging) but once again, she bolted before I could reach her.  And this time… I lost what direction she flew in. It didn’t look like she’d left the tree because I lost sight of her at the end leaves… but… we spent the next hour and a half walking all around that yard and the adjoining ones, staring up into trees. Whistling for her. I went home again and got binoculars to scan the branches better.

After a couple hours of searching, I finally had to give up and admit she was gone. She might have been blocks away by that point, and there was no way to find her.

I walked that court a couple more times that night and the next day, and left her cage out on the driveway yesterday, in case she was nearby and spotted a familiar thing to call her home. But she didn’t come. And I haven’t heard her chirps in the neighborhood when I’ve walked and whistled.

I can’t stop thinking about how lost and alone she must have been, once the instinctual joy of free flight wore off. No easy food or water. No comfy perch. No cockatiel nearby to call to and mimic. With very little experience flying, and no experience foraging, she is very likely dead already — picked off by a predator in a weakened state. Unless someone found her and took her in, she will be soon if she’s not now.

It’s a horrible lesson of never abandoning caution with your pets. We got lazy. I never used to open the inner garage door if the outer one was open. But we haven’t had a parakeet barnstorming the room since Boomer died six months ago. And BB had only just begun starting to fly. In fact, before Saturday, she really only had flown over to the cockatiel’s cage. Our 30+ years of “door caution” hadn’t started kicking back in yet.

We didn’t have her long — just over four months. But my heart is heavy. There are things in life that you can’t undo, no matter how much you want to. And it takes a long time for those things to leave your mind. I pray that she found a new human friend who took her in. Failing that, I pray that her end is/was quick and she doesn’t spend days in misery out there. 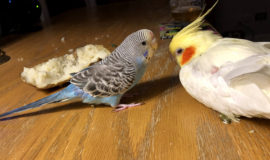 I’ve been hugging my other three birds close the past two days, but it doesn’t make up for the one that’s lost. The one that I couldn’t save.

Goodbye, baby bird.  I didn’t know you long, but you were rambunctious, playful and sweet. You worked your way into my heart faster and deeper than I realized until the past 48 hours. I’ll miss ya.