LAST WEEKEND WAS BOTH a Return and a New Beginning. I returned to the Horrorfind Weekend Convention in Gettysburg, PA after eight years. A lot of water has rushed under the horror bridge since the last time I was there.

But it was also a new beginning… most of the reason I went was because my new publisher, Samhain Horror, was a sponsor. A preview of the print edition of NightWhere debuted there and I spent most of the weekend at the Samhain table near the con registration desk catching up with my longtime editor, Don D’Auria (who knew he was as big a Jean Rollin fan as me?) — and meeting all of my new labelmates. There were eight Samhain authors in all at the convention, as well as Samhain’s Marketing Maven, Dawn Martin, and digital production man, Jacob Hammer. I have to applaud the positioning of the Samhain table — right across from the convention hallway bar. Who could ask for more?

I had briefly met a couple of them before, and have crossed paths with most of the rest on email once or twice, but this was the first time I really got to talk to Brian Moreland, David Bernstein, Hunter Shea,  Damien Walters Grintalis, Ronald Malfi, Mick Ridgewell, and Russell James. They’re an amazing group, and I think the weekend really brought us together and formed some strong friendships for the future. 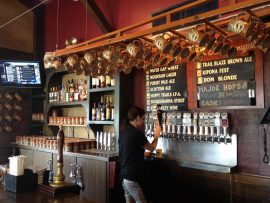 I rented a car at the Harrisburg, PA Airport to get to the convention hotel in Gettysburg (which is a good 40 miles away!) and since I hit town a little early, I took the opportunity to have a quiet pre-con lunch and write for an hour at the Appalacian Brewing Company (that’s ABC to me). They had a great Trail Blaze Brown Ale (just enough hops to start thinking IBA) and so I ended up adding another pint glass to my growing collection of brewery glasses! 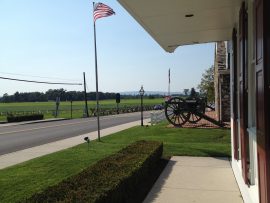 After a couple pints and a thousand words on the laptop, I realized I couldn’t procrastinate any longer, so I drove across town and joined the party. I met most of the Samhain crew as soon as I walked in, and over the next 24 hours caught up with my old Leisure Books/Delirium Books labelmate Michael Laimo, talked a bit with Tom Monteleone, Mark Sieber (Horror Drive-In) and finally (after years!) met Nick Cato and Colleen Wanglund (Horror Fiction Review), Athena Schaffer (Crowgrrl.com), and my Leisure Books copyeditor, Dave Thomas. And I got to hang out with my friends Jerry and Don from Synapse Films.

Friday night was really a night of introductions and people arriving (and, of course, the appropriately termed Scaryoke – scary in a “please God, no more” kind of sense, not in a bloodcurdling fear one).

Saturday is the big day of Horrorfind — 10 hours of shopping for cool horror stuff and meeting celebrities like Doug Bradley (Hellraiser), Ray Wise (the guy’s been in EVERYTHING), Malcolm McDowell, and Patty Mullen (Frankenhooker)… and then many more hours of drinking and talking. 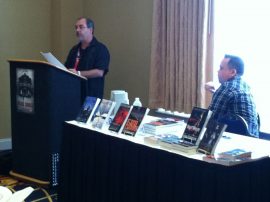 Brian Moreland and I started our Saturday morning with our live fiction reading hour (strangely enough, author readings were the ONLY programming this con offered!), and Hunter Shea (see picture) joined us to present a multimedia extra – an episode of his internet show Monster Men.  For my segment, I read the intro to NightWhere and then pulled out an old story that few have ever seen or heard, since it has only appeared in the limited Dead Inn anthology from Delirium nearly a decade ago — “Sacrificing Virgins.” People cringed and smiled in equal measures, so I think it went over well!

During the rest of the day, I bounced back and forth from signing books in the Celebrity Room to the Samhain table, and that night, our intrepid Marketing guru Dawn Martin, as well as our esteemed editor Don D’Auria took the whole Samhain crew out to dinner at an Irish pub in downtown Gettysburg. It was amusing to see how “tourist” oriented the downtown area was (who knew there could be like, five ghost tours in a five-block area?)

Nevertheless, we had a great time at dinner (I can’t believe Jacob ate that WHOLE steak) and returned to find the lobby and driveway packed with drinking, jabbering horror fans. We joined them for several hours… And as I went back to my room at 2:30 a.m. (after getting to sit in the driver’s seat of a hearse!), I found that someone had considerately placed a comfy chair in the elevator.

Sunday (Last Minute Buys and Packing It In)

On Sunday morning, I somehow ended up as the first person “alive” at the Samhain table, and I did a quick video interview with Count Gore De Vol before I finally did some shopping at the Synapse Films table and then packed up for home.

Before I left (actually as I was packing up at the table), Celebrity Guest Ray Wise stopped by the Samhain table, and Damien and I signed copies of our books for him. He seemed like a great guy; I wonder what he’ll think of NightWhere?

These things always end way too soon. After Ray left, I shoved the last things in my suitcase and headed to the rental car.

I did end it all the way I began though – sampling regional beer. Once I had ditched the car at the Harrisburg Airport (ya gotta love an airport where you can walk through all three terminals in about 5 minutes!) I had time for a late lunch/early dinner of crabcakes and hushpuppies and discovered another exceedingly drinkable area beer — Clipper City’s Phillips Amber Ale.

Here are some pictures from the rest of the weekend: 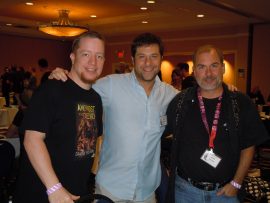 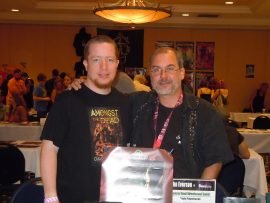 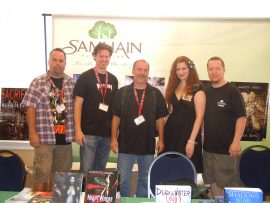 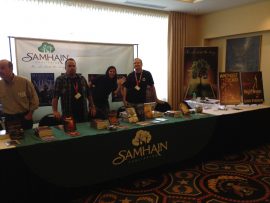 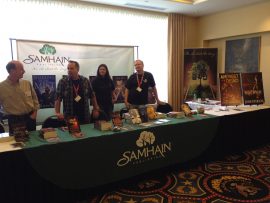 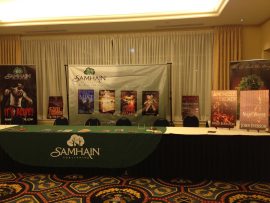 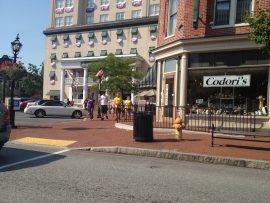 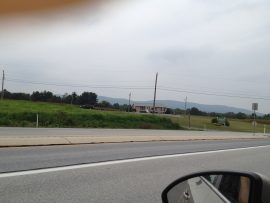 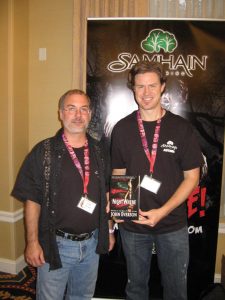 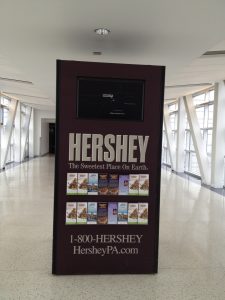 Special thanks to David Bernstein, Sandy Shelonchik, Brian Moreland and Dawn Martin for some of these photos!