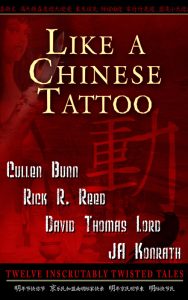 YESTERDAY, IT WAS ANNOUNCED that the latest title from Dark Arts Books – Like A Chinese Tattoo – was nominated for a Bram Stoker Award for Superior Achievement in an Anthology. Needless to say, Bill Breedlove and myself – the founders of Dark Arts Books – are more than pleased!

We congratulate all the nominees, and especially the authors from TATTOO – Cullen Bunn, JA Konrath, David Thomas Lord and Rick R. Reed.