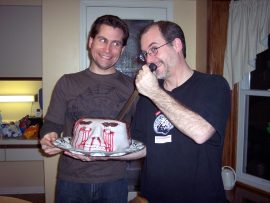 I haven’t cared much about birthday parties for a long time, but yesterday — I think I had one of the best ones of my life! It wasn’t really a “party” per se, but rather a movie night with a couple friends that I went to high school with. We’d actually planned to get together a couple weeks ago to watch horror movies, and winter colds intervened.

So instead, Larry and Lisa, and Larry’s brother Lon (that’s a lotta Ls!) came over for pizza, beer and movies last night. Lon makes really cool “monster” cakes as a side business, so he brought me a zombie head cake (naturally, with strawberry cake for brains!). 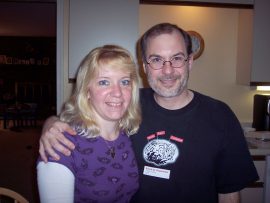 He also dragged out his five-foot-tall popcorn maker.

I had no idea they made these things for the home, but it was too cool — we set up this carnival-like popcorn maker in the basement TV room, and were scooping boxes of fresh movie-theater-style popcorn out of it all night.

Before the movie marathon, I opened gifts — in the morning, my wife Geri had given me the complete Outer Limits series on DVD (can’t wait to watch those again!) as well as an Erasure CD I wanted, and… a blender (the one I use for the occasional smoothie is pretty much shot). You know you’ve gotten old when someone gives you kitchen appliances for your birthday. 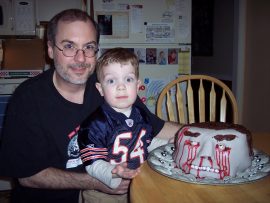 Lon, of course, gave me the cake and Larry and Lisa brought me a bottle of Makers Mark (they know me well!) Shaun really enjoyed the cake – he thought it was pretty funny that the cake was “a monster!”

So after numerous pieces of my favorite pizza (Aurelios – sausage, onion, green peppers, hot giardinerra) we headed to the basement for the movie fest.

We started with a short indie film that I first saw at Dragon*Con last fall — Zombie Love. Nothing says “Happy Birthday” like a zombie musical. Especially a zombie musical where all the dialogue is in couplets. 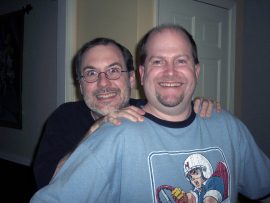 After that, we got serious and watched the atmospheric Session 9. It’s been a couple years since I first saw it, and I forgot how slow the build is (though it’s a great film!) The movie was the first 2:39:1 aspect film shot in HD Video and is described as “an excercise in creeping dread” – thanks in part to the location which is as much a character in the film as the actors — the abandoned Danvers Mental Institution in Massachusetts. Probably wasn’t quite the right choice for a group movie party, but nobody hated it.

We’d gotten too late of a start to break things up with a game of pool, as we’d hoped, so we dove right into the night’s finale, a complete switch in gears: Zombie Strippers with Jenna Jameson,  Robert Englund (who’s a riot in this) and punk singer Roxy Saint. 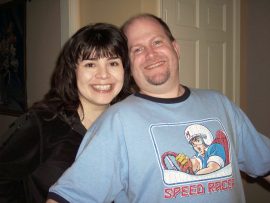 The title says it all — it’s kind of like Snakes on a Plane in that sense. When Snakes came out everyone kept saying: “They’re snakes. On a plane. Isn’t that hilarious?”

In this case it’s: “They’re strippers! And they’re zombies! Isn’t that hilarious?”

It was cornball, but funny. And the added “subtext” of being set in “Sartre” Nebraska with Nietzsche-isms sprinkled throughout the script of an otherwise completely throwaway T&A movie was pretty amusing.

So there you have it. A cool birthday the horror way.
I might have to make this an annual thing! 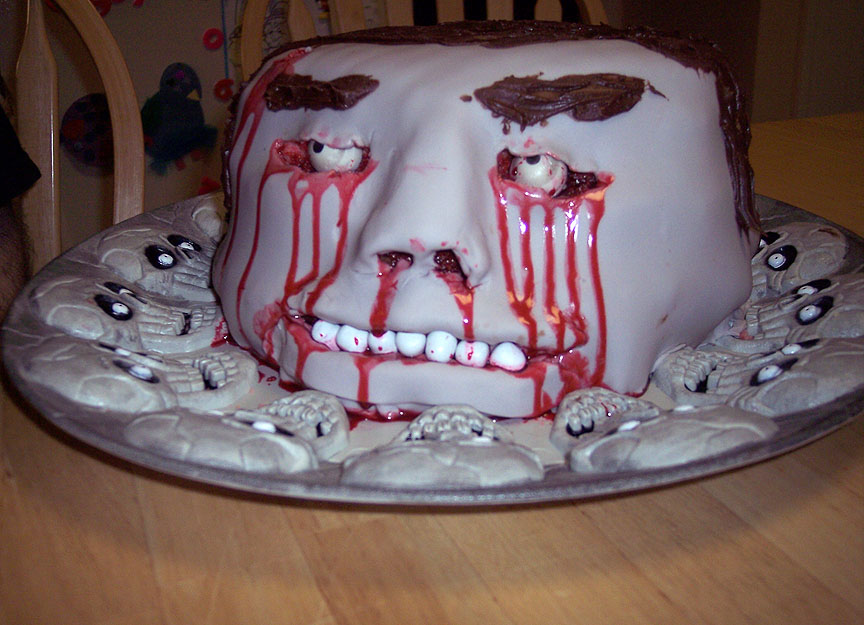