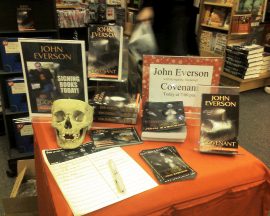 LAST WEEK, I DID a book signing at a Borders in Highland, IN, and received an unexpected surprise.

Joe, an old high school friend, turned up to say hi, catch up, and… give me a human skull.

Now… it’s not every day that someone drops by to hand you a human skull, delicately wrapped in plastic bubbles and consigned to a cardboard box. But there ya go. Even in high school, I knew how to pick ’em.  We put it on my signing table at the bookstore while we talked, and it definitely attracted some interest.

Turns out said skull had been found in the back of a wrecked car (my friend’s family owns an auto junkyard) and when it was found, Joe said “hey, I know just the person who needs this.” 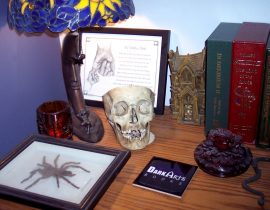 So yeah. I now have a real human skull in my home office. It’s definitely a bit creepier than the handful of fake skulls I’ve got sitting around here. I mean… this sucker once had human flesh on it. It probably talked. It had a name.

The sad part is, I don’t even know if it was male or female. I do know that it was subject to a worse fate previously than hanging out amid my creepy collection of knicknacks — it has a bunch of small screws in it, and the top of its skull was sawed off. So for at least some time, this was apparently a science exhibit.

I haven’t named it yet. It feels bad to give it a “wrong” name, but it feels worse to not name it at all. Maybe it will just come to me.

Or… maybe I’ll hold a contest. That way, if someone else gives it the wrong name, its ghostly retribution won’t be levied against me. Of course, as I sit here, it’s staring at me from across the room, so it knows everything I’m writing.

Maybe I’ll have to think about this some more…