Home Conventions Of Mice and Michigan

Of Mice and Michigan

I THOUGHT THINGS were going to slow down after the end of the main leg of the Covenant bookstore tour… but life hasn’t crept to a halt by any means. Over the past month I haven’t blogged because… well… I still haven’t been home!

Shortly after my Oct. 24 signing in Racine, I spent more than a week helping to man my dayjob’s annual convention, and a few days after returning from that, I hopped on a plane with my wife and son to spend five days in Orlando at Disney World. (And yes, that is an undoctored version of Cinderella’s castle lit in purple. I HAD to get a picture of that!)

That trip made me vow afterwards never to fly United again — our plane was delayed for mechanical repairs a couple hours on the way out, and our flight was cancelled just before we got to the airport on the way home! 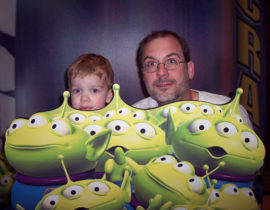 We had a great time at Disney – Shaun is just about three and a half, and he went wild over the Magic Kingdom and all the characters. I think we spent as much time in line to get pictures with characters as we did for rides. We took him to Epcot on the third day and Hollywood Studios on the fourth, where he got to go to a “Playhouse Disney” show and I got to ride the Tower of Terror

We also had dinner there at the Sci-Fi Dine In, a theme restaurant styled as a drive in — all the tables were actually inside old cars, and you watched the previews for cheesy old ’50s sci-fi movies while you ate. Truly inspired!

The boys were happy.

Here are a few pix from that trip (click to see larger versions): 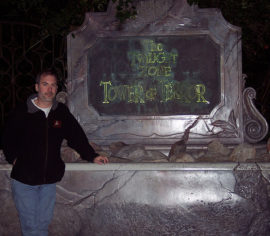 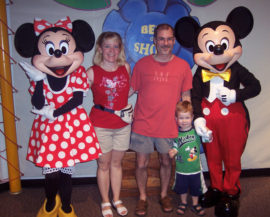 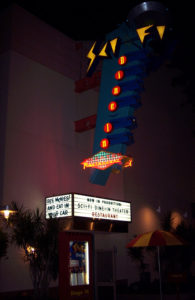 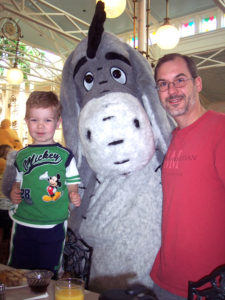 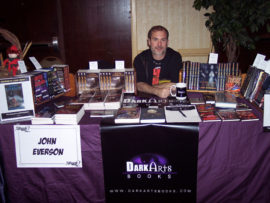 A couple days after returning from Disney, I headed up to Flint, MI for XCapeCon2, a comic/sci-fi/horror con where I was an invited guest.

Tom Sullivan was there with his Evil Dead museum of props, and there were two rooms filled with comic book dealers and artists.

I basically just hung out at a table there on Saturday and Sunday with lots of books and chatted with people — and I had a great time! 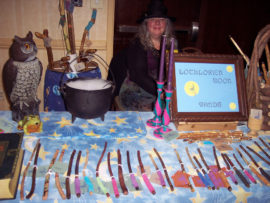 I won’t say the culinary offerings of Flint are astonishing, but I did find a decent Mexican restaurant on the first night, and I found that the Meier’s carries Newcastle :-).

Here is a picture of my table neighbor who had a great cauldron setup on her table, to help in her magic wand sales… I’m not sure her wands magic-ed away the effects of a dour economy, but I know I sent home a few people with books, and hopefully helped them dream a little darkly for a little while.