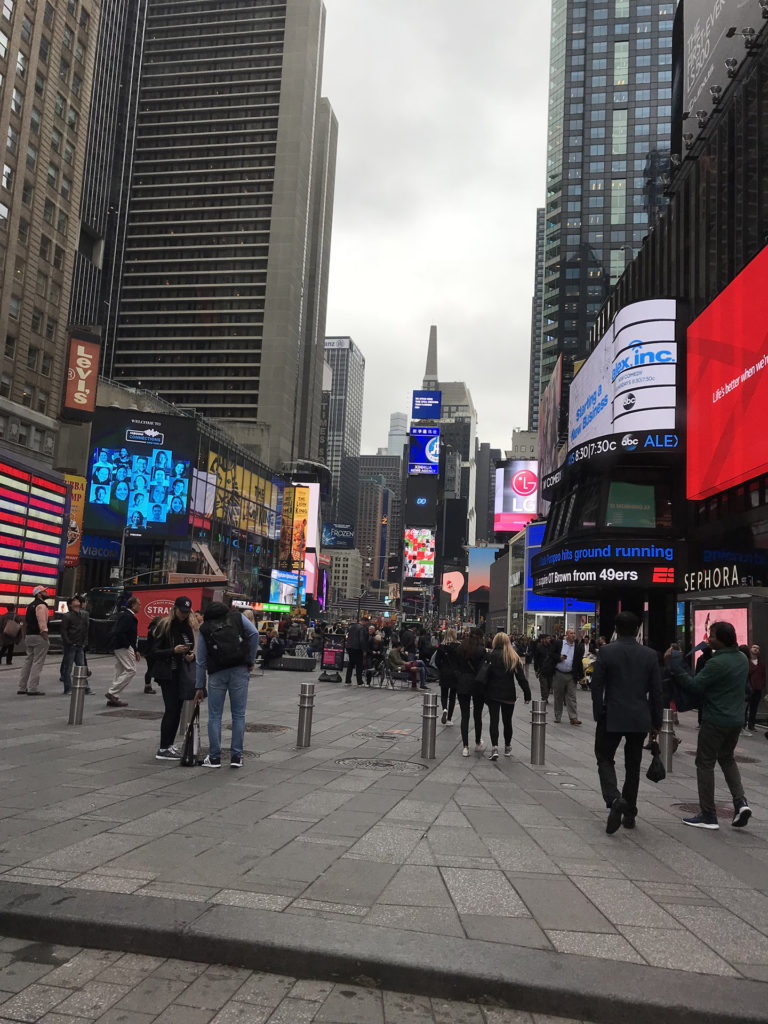 THIS HAS BEEN a crazy couple of weeks! Two weekends ago, I spent playing pinball with my son and friends in Michigan… and then, last weekend I spent working at a convention center in New York for my dayjob.

In between? I signed a contract for my 11th novel, finished the final rewrites and  copy edits on my 10th novel The House By The Cemetery, and had dinner with my editor to catch up and talk about both books. Kind of a whirlwind!

Some of the craziness came because my new publisher, Flame Tree Press, is holding a special signing later this month at Book Expo America to promote the debut of their new horror/sci-fi imprint.  The House By The Cemetery is part of the Flame Tree fall launch, so Flame Tree is bringing me, Tim Waggoner, Hunter Shea and Jonathan Janz to NYC for a day of signings at BEA on May 31. The wrinkle is, the new line doesn’t actually launch until fall,  which necessitated some scrambling to get ready if we are going to stage a big signing for unreleased books there! So at the end of April we needed to quickly get all of the final copy edits and rewrites done on The House By The Cemetery — in less than a week — so preview copies could be printed prior to the show!

I took a day off work to focus on the book edits and also spent a few nights after work going over all of the edits and tweaking things. And then a few hours after I turned the final thing in… I flew off to New York last Friday morning for my dayjob and consequently had the opportunity to meet with my editor, Don D’Auria, and talk through some of it. Pretty good timing on the work trip!

To up the ante even more, on the very day I was finishing my edits, Don offered me a contract for my next book The Devil’s Equinox, which I’ve outlined and am a few thousand words into writing.

So… a pretty crazy couple of weeks.

While I didn’t have much time to wander New York (since I was there to work!), I did get out and about a bit after hours. Here’s my quick travelogue:

On Friday night, I had dinner with Don and tried a couple IPAs at the District Tap House in midtown Manhattan. It was great to have a leisurely amount of time to catch up (it’s been a couple years since I saw him in person!) Loved the venue so much, I took a work group there the next night! 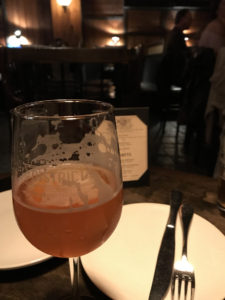 On the way back to my hotel on Friday, I stopped in at the Beer Authority (well, I was walking past, and it said they were the “authority”… how could I not take a look?!) Cool place… I tried an Avery Hog Heaven Imperial IPA there, which was just a little “thicker” than I wanted at that point, though. 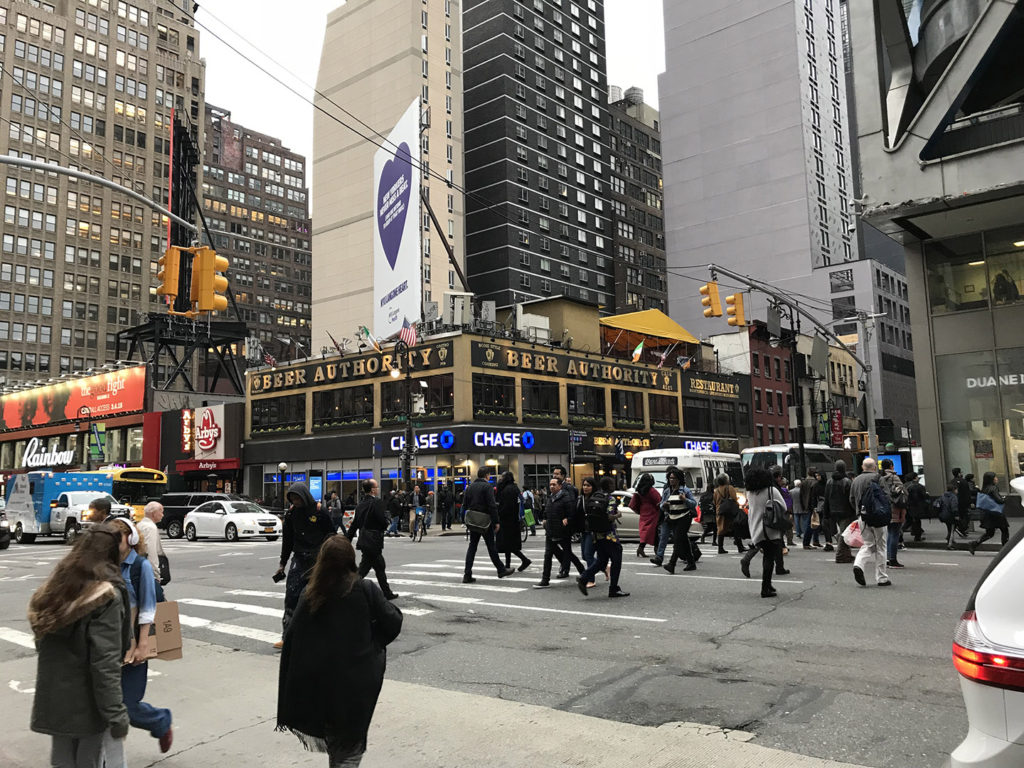 On Saturday night after work, I walked down to the TKTS booth on Times Square (half price Broadway tickets) and scored a good balcony seat for Beautiful: The Carole King Musical. Really enjoyed the show, which was especially appropriate to see in NYC since it told Carole’s story through the ’60s as she worked in a “songwriting factory” not far from where the musical was put on. The number of hit songs she wrote in her tenure there before finally graduating to her own smash album (Tapestry) is amazing. 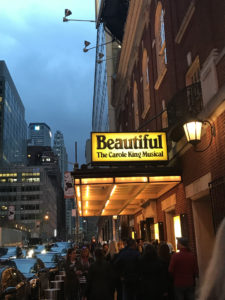 After the show, I stopped at Heartland Brewery, one of my other favorite NYC places for a burger and beer… and was excited to find that they still had some of their seasonal Old Red Nose Ale in bottles (I used to go to New York in December for a few years in a row and always had that beer there.) 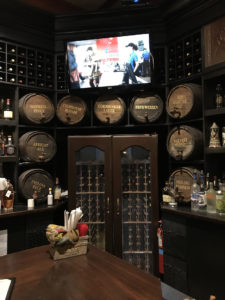 On Sunday, my work team and I explored The Keg Room for dinner (awesome place). 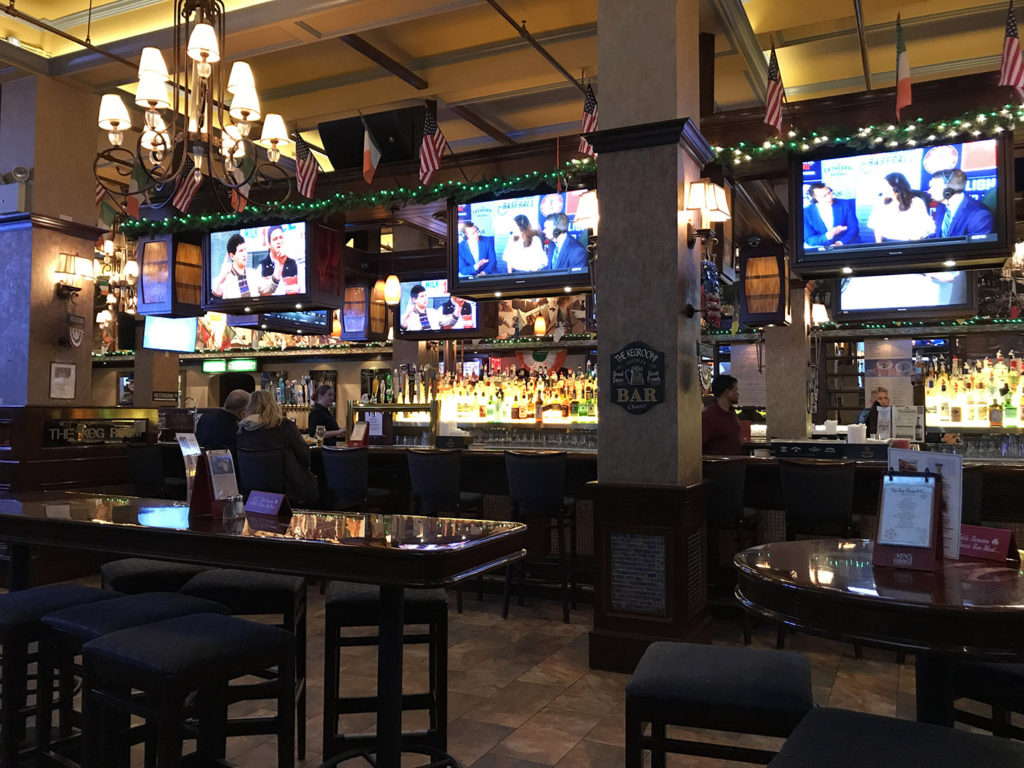 After dinner, I walked them down another block or so to introduce them to one of my favorite bars in the country – The Ginger Man.

I have actually never been there before when the place wasn’t sweaty-crowded, so experiencing it on a Sunday night (very quiet!) was weird. We also had the least talkative / most unfriendly bartendress I think I’ve ever met. So… not the best experience, but I still love the place. And a shot of Maker’s Mark balanced out the “fuzzy” factor of the Other Half Green City IPA. 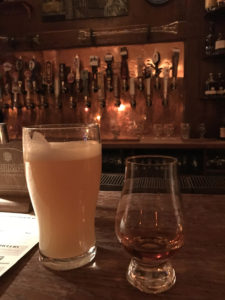 The convention I was working closed down Monday at 5, so after we packed up, a couple of us had dinner at a great Thai/Vietnamese place called Obao. Had a solidly spicy Pad Kee Mao for dinner there with Kimchi Fries and spring rolls! And a drink with jalapenos floating on top.

It was the perfect  “warm” end to a long day! 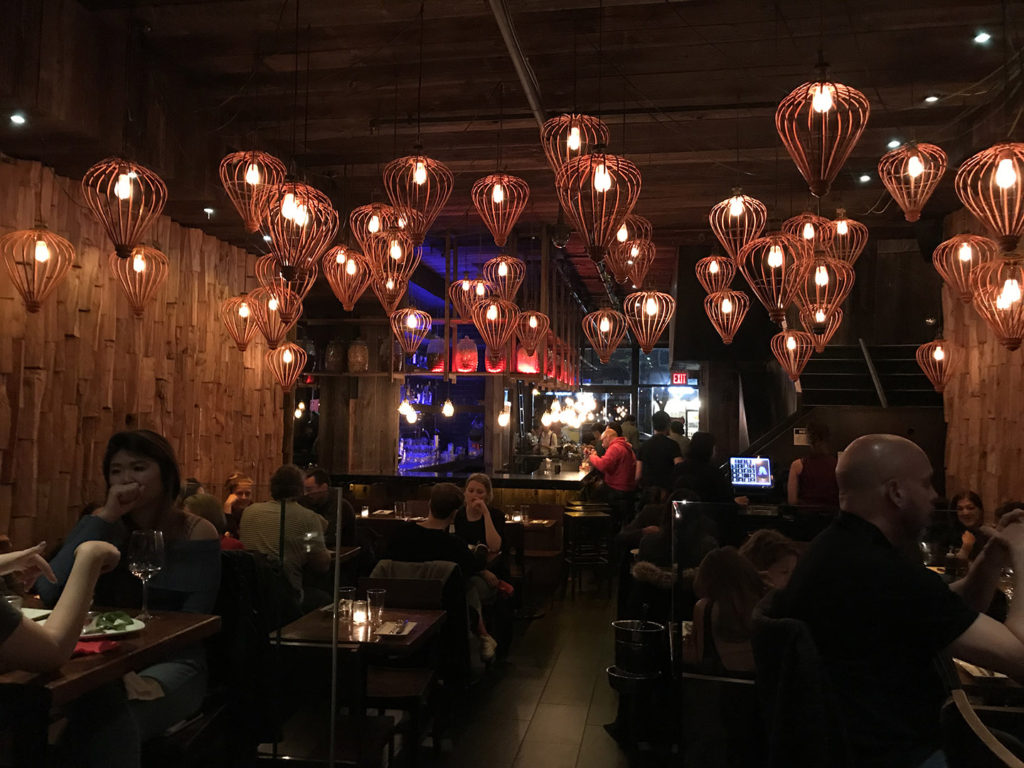 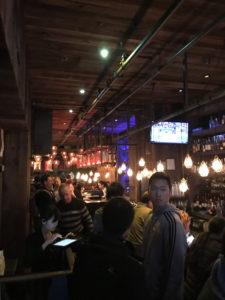 Afterwards, I headed to find a bar to write in for a couple hours. Originally, I was going to go to the Keg Room again, but halfway there I found Rattle & Hum, which looked like a great place for beer and some work… 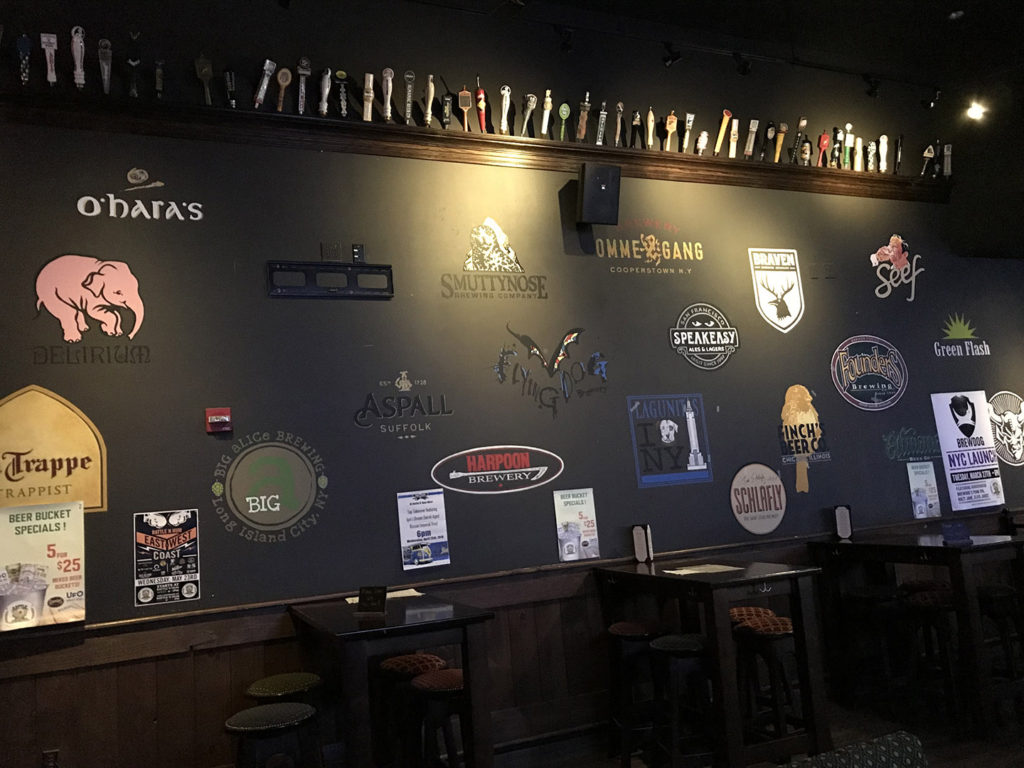 Alas… while the music was great, I couldn’t find much on the menu that I wanted to drink. That actually had been a theme the past few nights… the craft beer places in NYC feature a lot of local IPAs (which is cool) and it seems like New York IPAs all have a thick, hazy “fuzzy” quality to them that Midwest IPAs do not (ours seem crisp, clear and more overtly hoppy). 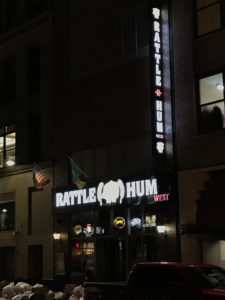 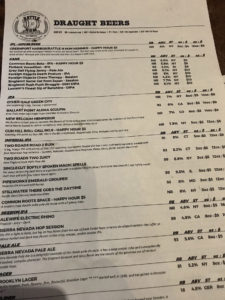 So begrudgingly, I quickly gave up my good seat at that bar and walked across the street to the Tir Na Nog Irish Pub (also a cool place), where I had a Stone IPA and actually got a few hundred words written on The Devil’s Equinox. 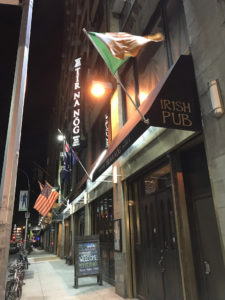 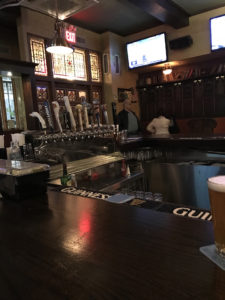 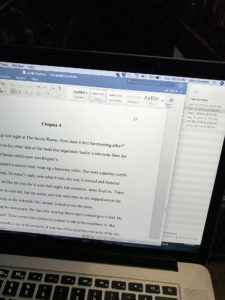 I had a meeting with one of my dayjob vendors on Tuesday morning down on Park Ave. (was cool to see their offices for the first time) and afterwards, walked quite a few blocks through New York on the first completely sunny day since we arrived.

A highlight of the walk? Finding an Amazon brick and mortar bookstore! I walked in and noted that contrary to many bookstores, all of their titles are faced out. That means less overall books can fit in the space, but every book shows off its cover and typically had a card beneath it with some kind of review. The store was divided up into genre topics, but also into areas like “People who like this…” and “Top Rated” by Amazon readers sections. Very Amazon.com! 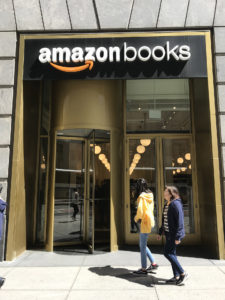 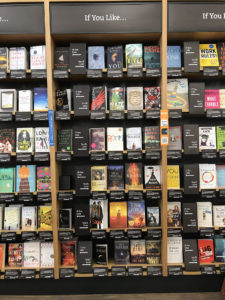 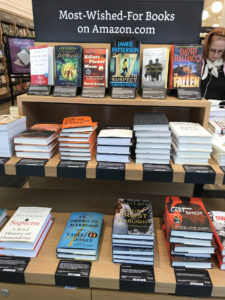 After walking through the Amazon store, we grabbed a quick lunch back at Heartland Brewing and headed to the airport. It was great to be back in New York again — I love the city! Looking forward to going back again for BEA in a couple weeks! 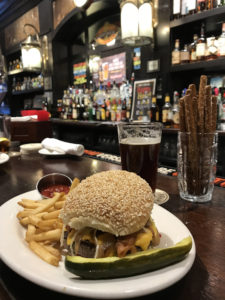 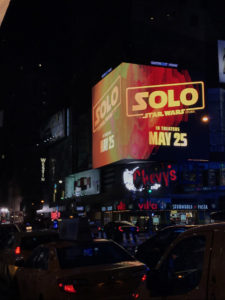 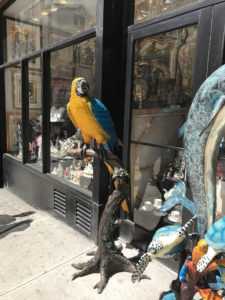 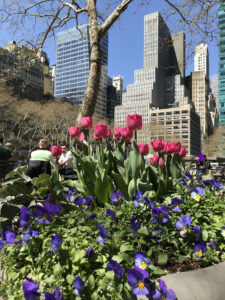 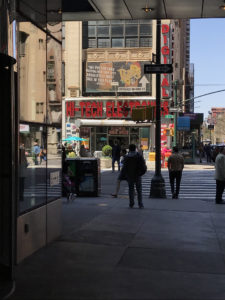 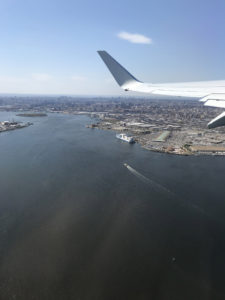 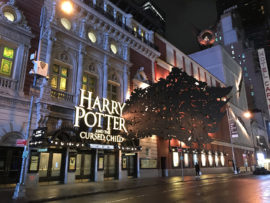 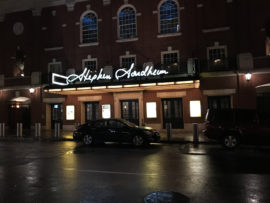 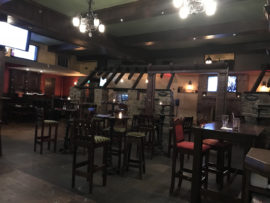 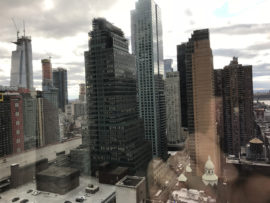 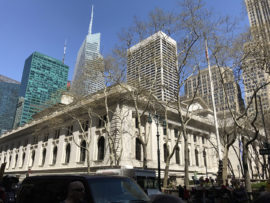