I HAVE TO SAY, this has been a pretty good week! On Monday night (actually, 1 a.m. Tuesday morning) I finished my final edits on my 6th novel, NightWhere! So finally, after a couple weeks of editing and rewriting (and a series of very late nights there at the end!), I turned in  the book to my editor Don D’Auria at Samhain. It’s scheduled for release in June 2012. 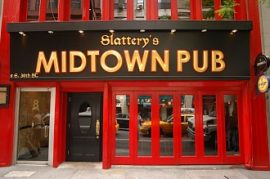 The next day, I was on a plane to New York City to work at a small convention for my dayjob. While it entailed long workdays, the trip afforded me some great (if short!) after hours opportunities.

Wednesday night, the day after turning NightWhere in, I ended up sitting in Slattery’s Midtown Pub talking with editor  Don D’Auria (about almost everything BUT the new novel LOL). Ironically, the pub is just a couple doors down from the offices of Dorchester Publications, which is where Don worked when he bought my first five novels for Leisure Books before moving to Samhain.

After a couple hours and drinks with Don, I walked up through the Broadway area to have dinner up on 9th Avenue at The Delta Grill, which a friend introduced me to the last time I was in NYC. They have great cajun food, and Abita Turbodog on tap (it’s so much better on tap than bottled)! 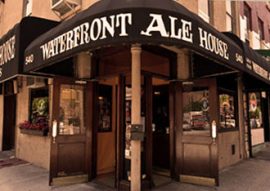 The next day was an insanely long one at the convention (6:00 a.m. til 7:30 p.m.) but afterwards, I did manage to enjoy a good meal before bed… this time down at the Waterfront Ale House on 2nd Street.

I had some smoked beef brisket there, which was good, but their homemade barbecue sauce (especially a shot of homemade hot sauce that was bottled up and sitting on the mantle behind my table) made it awesome.  I also tried the Anchor Christmas Ale which was on tap there — and it’s really good. I’ll be looking for some bottles of that for the holidays!

Two guys were sitting at the table next to me having a long conversation about movies… I kept wanting to jump in when they were talking about Akira Kurosawa, but restrained myself. Finally, after one of them announced that he was a huge Kill Bill fan, I couldn’t hold back. I introduced him to Thriller – A Cruel Picture, which is a Swedish film that inspired the “One-Eye” character from Quentin Tarantino’s Kill Bill.

Then I went back to my hot-sauced brisket. 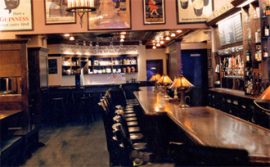 n the way home from Waterfront, I poked my head into the insanely crowded The Ginger Man bar, which I’ve seen the past couple trips to NYC (it’s across the street from Slattery’s). They have a long list of micro brews on tap, but I tried their “trademark”  beer brewed with ginger (isn’t that called ginger beer – a wonderfully sweet Jamaican soda? um. no.)  It was an interesting brew… going down clean thanks to the ginger… but I probably won’t imbibe it again.

Ironically, when I first hit NYC, I could have headed over to Rockefeller Center to see the lighting of the Christmas lights … it’s such a big deal that the place was apparently barricaded off for an hour after the event, I found out later… but I was clueless. Helps if you read the paper or watch the news… I guess. I don’t. Ever. And as it turned out… I NEVER got to Rockefeller Center during the four days I was there… though I was within a couple blocks every day!

On Friday, I was able to stop over at Dorchester Publications during my lunch hour to see my editor there, Chris Keeslar, who worked on my current book, The Pumpkin Man. I also got to catch up with the amazing Hannah Wolfson and Allison Carroll, who have been handling all the promotions and website updates for Dorchester over the past few months. It was nice to be able to talk with them in person for a bit, and to see the old offices a last time — since the company has reduced staff and overhead over the past year, they’re now moving to a smaller space in the next couple weeks. There was also an unexpected bonus to the visit — I walked away with a royalty check! Merry early Christmas! 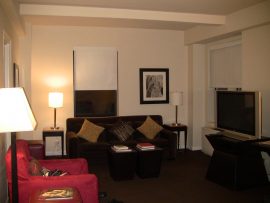 That night at 7:30 p.m., while lying on my hotel room bed at the St. Giles – The Court (a really cool boutique hotel on 39th & Lexington) and trying to decide what to do about dinner after a long day, I suddenly got the impromptu idea to run over and see if there were any tickets left for the 8 p.m. show of The Addams Family, starring Brooke Shields. 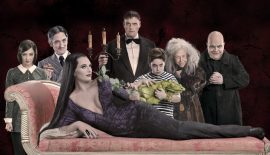 I got dressed and hustled up to the theater, arriving five minutes before curtain. I scored 3rd row Mezzanine for what turned out to be a great show. Brooke was good as Morticia, but the musical was really Wednesday Addams’ story (she falls in love with a “normal” boy) and Rachel Potter as Wednesday was brilliant. 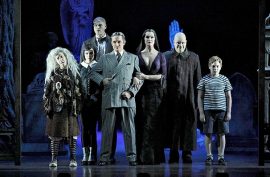 d love to see this one again, but it turns out that I really lucked out — the show closes after 725 performances at the end of this month! Wish I had a DVD.

After the show, I was starving, having only eaten a street hotdog (with sauerkraut!) that day at lunch. So on my way home from the show I had dinner at the Heartland Brewery in the middle of Times Square. They actually have several outposts in Manhattan, and I tried out their Old Red Nose Ale… which was awesome! Unfortunately, they don’t bottle their beers like  Anchor, so I probably won’t get another chance to taste that one.

The next day after packing up our exhibits, I headed straight to the airport, so I have no fun Saturday stories, other than that when I got home, I watched a long-lost José Ramón Larraz movie Deadly Manor… it didn’t hold a candle to his classic Vampyres, sadly).

Today, we took Shaun to see The Muppets movie and I think the parents were more enthralled than the child. I’d go see that one again too.

So there you have it. This week I turned in a book, met with two different editors in NYC, saw a cool Broadway musical AND a Muppets movie and still put in a good 50 hours for the dayjob. Oh, and this afternoon, I also built a gingerbread house with my son. We plugged a LOT of candy into that frosting.

I’m gonna be tired back at the office tomorrow!