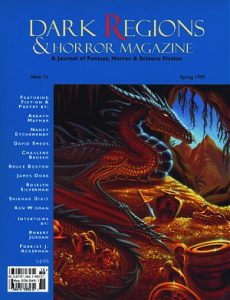 WELL, TIME TO CLEAR the decks. I’ve decided to clear the Journal plate of 1997-1998 entries and start anew.  And so we begin…

So what’s going on with me? A LOT! I seem to be on a fiction glut of late.

At the start of the year, Bobbi Sinha-Morey offered me the chance to help her and her publisher-husband Joe Morey as an Assistant Fiction Editor for Dark Regions magazine. So suddenly, after contributing to magazine manuscript slush piles for the past six years, now I’m reading through them! I’m also currently copyediting a great new Gerard Houarner book to be released this year by Necro Publications.

I’ve also completed three new short stories of my own over the past month (one of which has been tottering towards completion since the summer). It looks like my first story to be published in 1999 will be “Pumpkin Head” in Grue. The magazine was due back from the printer sometime this week. And I just got word tonight that my story “Cold Justice For A Burning Heart” will at last be available in the long-delayed next issue of Haunts by April.