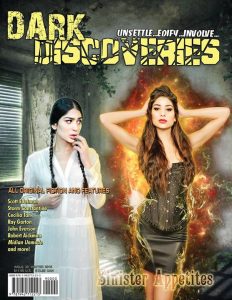 A LOT OF PEOPLE  have asked me if I’m going to write a sequel to my sixth novel, NightWhere. I do want to eventually… I’ve always been interested in exploring the character of Selena more. But, that’s not what I’m currently working on. Never enough time to write all the stories I’d like to!

I did, however, write a long “side story” set in the world of the novel awhile ago that has at last come out in the new issue (#30) of Dark Discoveries Magazine! The new novelette is called “Feeding the Field of Flesh,” and it finds a P.I. lured into trying to rescue someone from the dark world of NightWhere.

Check it out here: http://journal-store.com/fiction/dark-discoveries-issue-30/

THIS WEEK, Amazon has my short fiction collection Cage of Bones & Other Deadly Obsessions on a Kindle Countdown Deal. The book will be $0.99 cents  (or £0.99 in the UK) until Thursday. I’ve always been proud of this book… it was my very first! Longtime indie horror fans will recall that this was one of the first hardcover releasess from Delirium Books almost 15 years ago. Reviewers have called it: “Sexy, Disturbing, Brilliant!” and “…a dark and tantalizing show well worth the price of admission.”

Get it while it’s cheap here:
http://www.amazon.com/Cage-Bones-Other-Deadly-Obsessions-ebook/dp/B00EAOU7Z0/

Here’s the Amazon description:
Meet a witch who conjures genital dragons while singing Manilow. A woman who provides a true window to her soul. And a real cage of bones! Not to mention “Pumpkin Head,” a dark tale of jack-o-lanterns…and the dangers of Halloween lusts…