My new “Bug Music” column is out now in TALEBONES 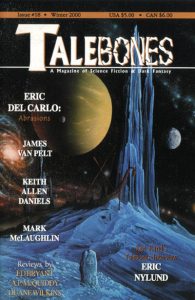 MY FIRST “BUG MUSIC” column for Talebones is now out in issue #18. Of course, that means it’s time to sit down and write the next one <G>.

Today I saw the first rough illustration ideas for the inside cover of my fiction collection, Cage of Bones and Other Deadly Obsessions, due this summer from Delirium Books. They look great — I’ll post the final one here as soon as it’s finalized.

Over the weekend I also finished a last-minute new story for the collection — based on the imagery of the cover illustration. The artist, Andrew Shorrock, let me know what he was working on, and his description was so vivid that I found myself absentmindedly fashioning a story around it on my way to work last week — the first time I’ve ever written a story inspired by a piece of art. And an unseen piece of art at that.