SO FOR YEARS NOW,  I’ve heard about how I should go to Flashback Weekend, a horror media con held out in Rosemont, IL (not far from where I work). For one reason or another, I’ve never ended up going, but this year, Mitch Wells, from The Horror Society.com offered to sell some of my books from his table, so I decided to head up and take him up on it — and finally check out the con.

I’m glad I did!  While it was a nightmare plowing through the traffic to find any parking garage that was open in the area (Wizard World Chicago Comic Con was going on in the convention center right across the street!), I had a great day at Flashback.

From Alien to Thriller – A Cruel Picture

As soon as I walked into the place, I ran into local horror friends Ron Fitzgerald and Martin Mundt. Not too much later, I found myself standing next to actor Lance Hendriksen at the bar, and then a bit later, I saw Christina Lindberg, the actress whose early 70s performance in Thriller – A Cruel  Picture was Quentin Tarantino’s inspiration for the lead character in Kill Bill.

Probably the best part of the con for me though was the short  Q&A with Malcolm McDowell which centered largely on his work in A Clockwork Orange. I first saw the movie 25 years ago as part of a college film class, and it had a strong impact on me then. He talked a lot about how the movie has continued to impact on each generation that discovers it, as well as of the eccentricities of director Stanley Kubrick, including how they chose the models who would serve as the titillation for Malcolm’s character in the film. McDowell said Kubrick invited him over to his house to hole up in a locked room to look at demo reels of actresses. They ended up taking photographs of the breasts of these nude models reciting Shakespeare and then, when the photos were developed, they met again to look at the stills side by side. They then took turns picking the best breasts. The kicker was, Kubrick had forgotten to mark which model was which on the photos.  High art, indeed!

After having dinner at the bar and talking to an independent film promoter, I watched the Zombie Pinup Contest — which had a long line of contestants anxious for brains — and also saw Linnea Quiqley during a showing of a new documentary on the “Scream Queen” era, which was a cool look back at the age of B-movie horror queens. And I also had a great time talking with the guys at Synapse Films, who ended up with a bunch of signed copies of my novels.

After a showing of The Molemen of Belmont Avenue, the amazing Chad Savage gave me a tour of the Zombie Army Productions bus, which was hosting a party behind the hotel. You gotta love a gunmetal colored bus that’s been tricked out with a sound system and a bar. Those zombies know how to pour (maybe it’s the slow reflexes?)!

Next year? I want to hang out for the full weekend! 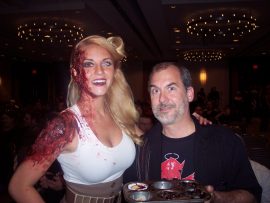 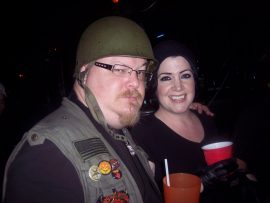 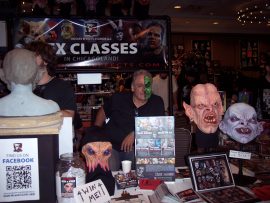 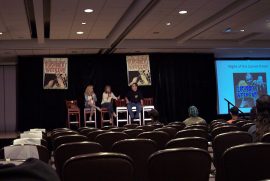 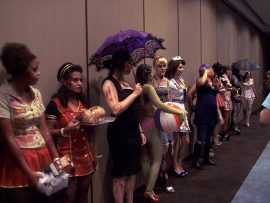