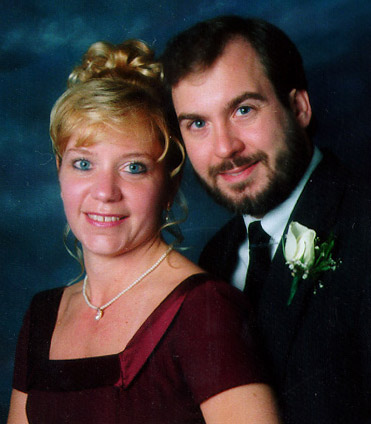 TODAY – JULY 23RD – marked the 23rd year of marriage to my wife Geri. It’s hard to believe all the twists and turns life has brought over those years (not to mention through the five years of dating before July 23, 1988). Three houses, apartments, vacations, fights, fun, the birth of my son Shaun… life has never gotten boring.

A couple weeks ago, we were channel surfing (a rarity, since I almost never watch TV) and stumbled on the modern version of “Dr. Who.” It was weird to see all of the modern effects and energy turned on the show that we used to watch when I was a senior in high school, and Tom Baker was the Doctor, with that incredibly long, fat scarf. That was an anniversary moment of sorts too.

Life just keeps moving on. And you have to keep moving with it. 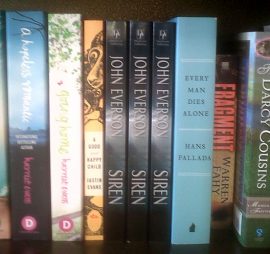 Tonight, to celebrate, we took a couple hours for ourselves and dropped Shaun at my brother’s house and went to dinner at a local Italian place we’ve wanted to try – Mia Francesca’s.  Afterwards, we walked around town a bit and ended up — where else? — at a bookstore.  Books always brought us together, and with the announcement this week of their liquidation, we’re both mourning the loss of one of our favorite places on earth — Borders Books.

The centerpin of downtown Naperville is a huge Barnes & Noble store, so we went in and found more tomes we don’t really need. And I found, to my surprise, that they had three copies of the re-issued edition of Siren in stock. So I signed those for the manager who put them on the “Autographed Copy” display for awhile.

I’ve seen my books in stores a lot over the past four years, but I actually haven’t been out to stores this past month to see Siren , so it was cool to know it’s shelved and hopefully getting looked at. And it’s cool to think back 23 years and consider. Back then? I would never have thought about having novels with my name on the spine in stores. I would never have thought that I’d write a novel at all. Let alone five!

After book-surfing, we wandered over to another place I’ve wanted to try — a local spinoff of a Chicago Sinatra bar called Jilly‘s. It was nice to have the time to sit at the bar and buy my wife a drink and just talk and people watch.

Time moves on, businesses rise and fall and friendships come and go. It’s kinda cool that there are some things though that never change. Like me and Ger.