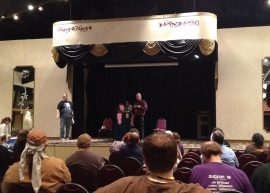 I WAS AN AUTHOR GUEST this past weekend at DucKon, a local SF/F convention that’s expending its reach a bit into horror these days as well. I was there briefly last year, but this time around (as the con celebrated its 21st year in existence), I was around for the full weekend and sat on a number of panels.

It was a nice local kick-off for the release of my sixth novel NightWhere, which launches in e-book form on all the major platforms tomorrow (it will be in trade paperback format in bookstores this fall).

The coolest part about it for me though was getting to spend some quality time with my friends (and fellow horror authors) W. D. Gagliani and David Benton. They live in Wisconsin, a couple hours away from me, so while we’re technically “close,” we rarely see each other except through conventions. 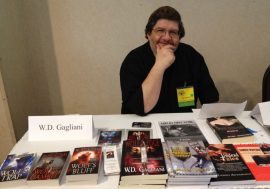 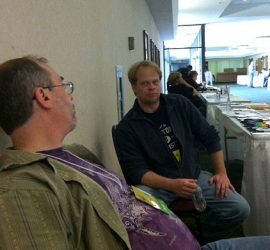 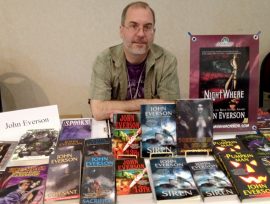 Since the three of us pretty much held up the “horror” end of the con’s programming, we were on a lot of panels together over the weekend, and had our own “Trilogy of Terror” hour on Friday night, where we read our fiction aloud. I read the Prologue to NightWhere, as well as an older short story called “Dead Girl on the Side of the Road.” Bill and Dave performed a riveting tag-team reading of a pretty intense horror short story that they co-wrote. 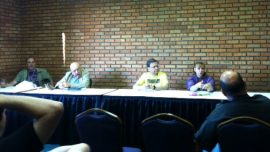 This was the first year that DucKon was at the Pheasant Run resort (in St. Charles, IL) which gave congoers some logistical hiccups: the exhibition area, where signings, the green room and parties were held, was as far away from the panel rooms as you could get — and it’s a big resort!

Still, we had a good time despite the exercise, and I found myself on some interesting panels, ranging from debating the existence of heaven with SF icon Gene Wolfe to talking about the “Mystique of Publishing” with Guest of Honor Robert Sawyer to discussing the definition of “Evil” and “Author Collaboration” with Bill and Dave.

And the Collaboration panel also allowed me to finally meet in person “Klingon Guest of Honor” Keith R. A. DeCandido who is one of the seven authors that Jonathan Maberry invited to create V Wars with him, a new shared world vampire anthology. Keith and I had originally proposed the collaboration panel as a good excuse to talk about that book, since we both have stories in it and were at the same convention. Unfortunately, the release of V Wars was delayed until the end of June, so we didn’t have copies on hand. Instead, Keith pulled up the cover image on his laptop to show the audience.

On Saturday, my wife Geri came up with our son Shaun to hang out and have a little mini-vacation at the hotel. They didn’t go to the con itself, but it allowed Shaun and I to take a dip in the indoor-outdoor pool, and later on, Shaun managed to attract a magician who made him a Spider-Man balloon. We all had a relaxed dinner with Bill and Dave before disappearing back into panels again.

Later, Bill and Dave and I checked out the “Barfleet” Party, a traditional element of DucKon which seemed a bit more subdued than last year (where was the Horta???) and then after a couple more panels on Sunday morning, the con was already over. It was a fast but enjoyable weekend.

But there’s no rest for the wicked. Tomorrow marks the release of NightWhere; on Wednesday I leave for a short business trip to Toronto, and on Saturday I’ll spend the afternoon at the HWA tent at Chicago’s Printer’s Row Lit Fest before hopping a plane again for work on Sunday.

I definitely can’t complain about being bored!

Thanks to Bill Gagliani for shooting a couple of these photos!