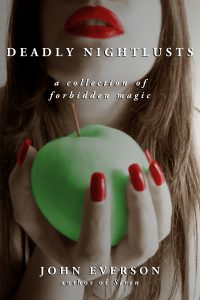 This collection began as a quick ebook “two-fer” download of a couple of my older stories that I really liked but had never previously been collected. Somehow it grew to become a seven-story collection with a brand new tale, “Green Apples, Red Nails” written specifically for the book, inspired by the cover art. The reprints include “Pumpkin Head,” “A Lack of Signs,” “Star on the Beach,” “To Earn His Love,” “Sacrificing Virgins,” and “Body & Blood.”

“Pumpkin Head” has turned out to be one of my most popular short stories and has seen multiple printings, but the story “To Earn His Love” has never been reprinted outside of its original appearance in the small digest-sized magazine Crossroads in 1995. Likewise with “Body & Blood,” which appeared in the one-off ‘zine Lords of the Abyss that same year. I’d be surprised if more than 100 people ever saw either story before now. And I know only a couple hundred people have saw “Sacrificing Virgins,” which was part of the very limited Delirium Books anthology The Dead Inn back in 2001. I’m excited that some of these stories will reach a much wider audience now via this new collection!

Here’s the back cover description of the collection:
Lust has a powerful hold on us. It can be a beautiful thing, but also quite dangerous. With this collection from John Everson, author of Covenant (winner of the Bram Stoker award), and Siren,  you’ll meet those who have succumbed to lust through black magic and deals with the Devil. You’ll read six treats from the vault of John’s early years as an author, plus a brand new story.

Lust consumes us all, but what depths would you go to satiate it? Start with a green apple, lick your lips, and add a pinch (or more) of Deadly Nightlusts.