Home The Horror Life Christmas is the time…

Christmas is the time…

CHRISTMAS IS THE TIME to celebrate your family and friends. It’s a time to remember and rekindle. It’s my favorite time of the year, not because of gifts, but because it’s when you get together with friends and relatives who you might not see often, if at all, during the rest of the year.

My Christmas week has started out great — I am on vacation for the next couple weeks, and so last night, I staged my third annual Christmas Ale (and bourbon) and Chili by the Pool Table night, with a group of guys from our neighborhood. 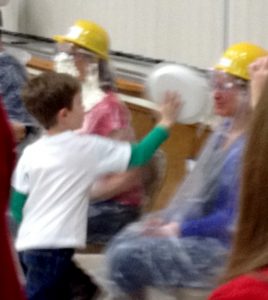 Because I was home yesterday, I was able to take a break from my afternoon of chili-concocting to go watch Shaun’s school sing Christmas carols in the gym. I also got to see Shaun throw a pie in his teacher’s face! One of the school’s fundraising drives this year was to sell pies — and my wife Geri was one of the masterminds in charge of this year’s event. To spur on pie sales, they staged an event where if you bought a pie, your kid got entered in a drawing to be able to throw a pie in a teacher’s face at the Christmas party yesterday. Ironically, Shaun’s name was drawn by the principal!  It was a fun hour and the kids had a blast… and Shaun got to do something most kids never have a chance to do!

Then I went back to my kitchen to finish preparing my jalapeno cornbread and three flavors of Chili. I’m a “bean” chili kind of guy, so my chili has hamburger with kidney beans and chili beans, along with a healthy collection of sweet red and green peppers, onions, some homegrown tomatoes, garlic and different varieties of hot peppers, some of which I brought back from New Mexico and froze a few months ago:

Seven of my friends from the neighborhood came over last night, and we pretty much polished off most of a giant vat’s worth of Chili. I filled a big silver soup pot to the brim during the afternoon before dividing it into three crock pots and adding the different peppers. The little bowl in front of the soup pot in the picture below is all that was left this morning! 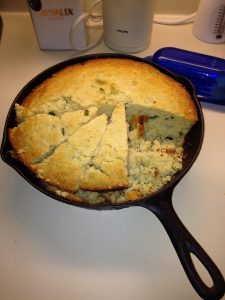 Everyone brought their favorite holiday ales, and after the chili, we cooled off the gullets with plenty of those, as well as some bourbon. This year my personal favorites are the Deschutes Jubelale and Boulevard’s Nut Cracker Ale, thanks to their rich, carmel molasses tones, but we also had some of my favorite from last year, Great Divide’s Hibernation Ale, as well as Fistmas from Chicago’s Revolution Brewing and the Christmas Ale’s from Breckenridge and Great Lakes. We spent much of the night around the air hockey and pool table, trading off stream-of-consciousness DJ-ing via YouTube and my iPod library.  3 a.m. came really fast! 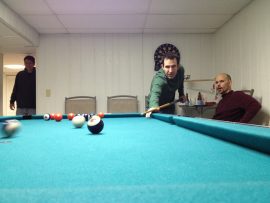 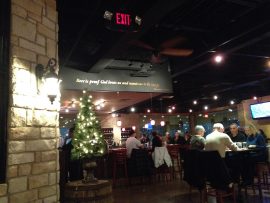 After a great evening with friends last night, tonight we went out to a new local brewery — Hopvine — for dinner with another family. Shaun and their boys spent the whole time messing around with the iPad and iPhones while the adults got to catch up. The food and company made for a relaxing evening. And I love the Ben Franklin quote they have posted above the bar there (click the picture to see it).

This is the way life should be all the time — getting together with your friends every week, but we’re usually too busy running around “taking care of business” to make it happen very often.

I wish Christmas came more than once a year!