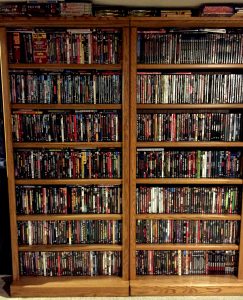 SO, A LOT OF authors this week have been posting their Top 10 lists of Best Books Read in 2015 and I feel like I should follow suit, but honestly… I haven’t read 10 books in the past year. If I posted a Top 5 list, that would probably encompass almost everything I read — kind of pointless to post that. But I do watch a lot of movies. For many years now, every weekend, on Friday and/or Saturday night, I disappear into the basement around 11 p.m. to watch a DVD on the big-screen TV (and yes, always a DVD. I’m a hard-media fan, and I don’t subscribe to any streaming services. If I watch a movie, I have a copy that I can return to. I’m the same way with books, really, not that I’ve been reading much lately.)

So this year I thought… what if I put together a list of my favorite movies watched over the past year? Well… first I’d have to figure out what I watched. I scoured my Amazon and eBay Order lists for purchase dates, as well as skimmed emails to a couple friends that I tend to chat about movies with to see what I’d talked about DVD-wise this year, and I looked at my DVD rack for things I know I watched/filed in the past few months. Anything that was at all questionable didn’t make my list — so I know there were some more movies that I saw this year. I just don’t have a good record.  Then I looked up the directors, year released, and assigned off-the-cuff star ratings (questionable, since my memory sucks and many of these were watched months ago). The end result?

I saw at least 78 movies this year, about 10 of them “re-watches” (I just rewatched the whole Star Wars series, so that covers much of that list!) I tend to focus on directors; I was discovering Alejandro Jodorowsky at the beginning of the year, and Radley Metzger more recently, so there are several from each on this list.  It was interesting to see how my list divided by genre, and while you could argue with my categorization on some (I don’t see World War Z as a horror film so much as an Action film), by my counts, I watched 23 horror movies and 18 Science Fiction films. Then a half dozen each of Arthouse, Kids, Comedy and Action.  It was a little surprising that horror didn’t dominate the list more, but I was even more surprised to find that none of my 5-star ratings this year went to horror films. Go figure.

Anyway… here’s my list of what I watched and what my favorites were this year. I think I’ll actually keep this spreadsheet going so I have really accurate tracking next year!