Home The Horror Life 48 is Great?

Yep, this weekend I turn 48 years old. I guess time flies when you’re constantly staring at a computer screen!

Yesterday I had lunch with a friend I haven’t seen in a long time. We met back when I was 28… which also turns out to be the same year I started publishing fiction. It was great catching up but… damn… how did 20 years slip by so fast?

I won’t get all melancholy about it though. This weekend is shaping up to be a fun one — centered around catching up with friends and family. I’ll be having dinner with my friend Jerry from Synapse Films tonight, with my friend Brad and his family on my actual birthday tomorrow night (at my beloved Hofbrauhaus!) and with my dad on Sunday. And in between… I’ll be hanging out all day at a book table on Saturday talking with horror fans at the Indie Horror Film Festival. It’s being held this year at Schurz High School on 3601 N. Milwaukee Ave. in Chicago, so I’m hoping to see some more friends from the Chicago area at that event!

Next weekend, I’ll be returning to DanCon in Orland Park — so I’m hoping to catch up with even more horror and dark fantasy fans then at the Orland Civic Center next Sunday, March 23rd. It’s going to be a blast!

I figured I’d have a little fun with the whole 48 thing, so I’m advertising a “.48” sale. I put my horror books that I personally have control over (most of my books are with other publishers) on sale this month at $1.48 or $2.48.  So if you don’t have them yet, pick up Cage of Bones & Other Deadly Obsessions, Vigilantes of Love or Failure on sale for cheap at Barnes & Noble, Kobo, Smashwords and Amazon (sort of). Amazon has only adjusted the price of Vigilantes of Love so far, but hopefully the other two will follow. If you already have these books, please post a quick review about them on Amazon — and help spread the word about the sale ?  Here’s how you can find them: 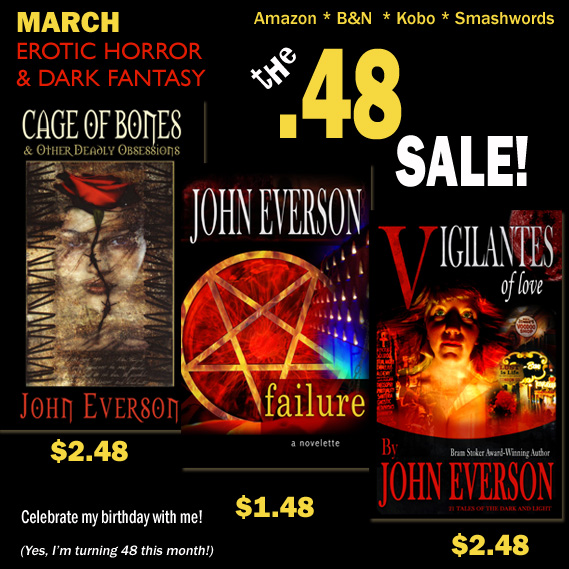