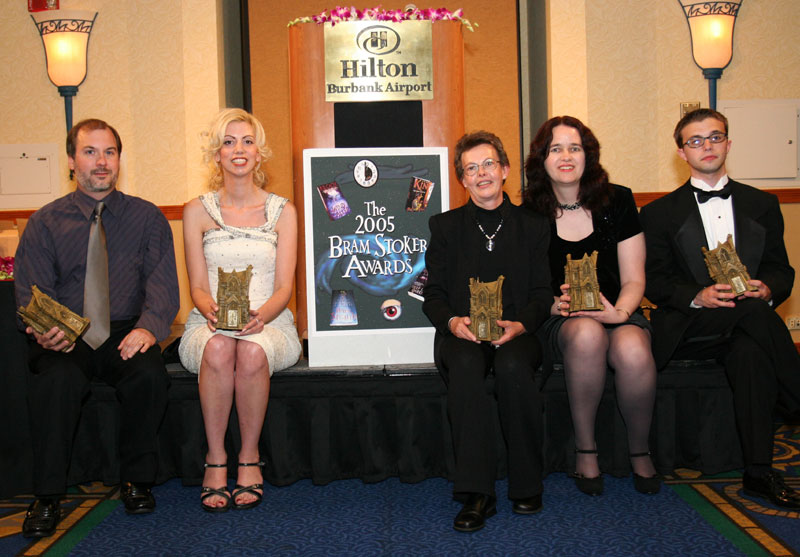 NANCY ETCHEMENDY CAN correct me, but I’m pretty sure my first words to her upon returning from the podium were…”holy crap.”

I didn’t expect to win the Stoker Award for First Novel from the Horror Writers Association (HWA) last weekend. Honest. It was an honor to be nominated, but while my novel, Covenant, received good initial reviews, it was also on the smallest press out of the four nominees, so I really didn’t have high hopes for taking home a haunted house (sorry Harlan, I meant to say “an Usher”).

I went to Burbank, California on June 24-25 to enjoy the weekend, capitalize on the nomination (how many times do you even get nominated for a Stoker?) and accept a special award on behalf of my publisher that honored Shane Ryan Staley and his Delirium Books for their contributions to the horror genre. 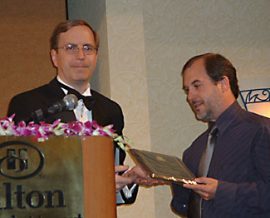 But then, a little while after Bev Vincent presented me with Delirium’s plaque and I read Shane’s e-mailed speech (see below) in front of the audience of Stoker attendees (which included Clive Barker and Chuck Palahniuk and a Horror Channel camera crew) and after Nancy Etchemendy made good on a dare to accept Steve Dorato’s “Silver Hammer” award by singing “itsy bitsy spider”…HWA President Joe Nassisse went to the podium and said there was a tie for the “First Novel” category. And for the first time, it crossed my mind that I might actually have a shot! 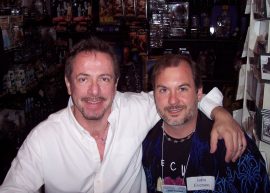 Joe called out Lee Thomas‘ name first, for Stained, and Shockliner Jonathan Reitan accepted on his behalf with a great speech that Lee had sent Jonathan on the off chance that he won.

I should have been so prepared! Because then Joe called out the other half of the tie — Covenant.

I was completely shocked.  I remember going to the mic and saying something like “this will be neither long nor eloquent” like Lee’s speech, since I totally didn’t expect to win the award. 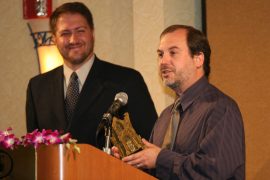 I thanked my wife Geri, first, for all the time she spent sitting alone while I plodded away at various drafts of the novel, and my dad for loaning me his cottage in the North Woods of Wisconsin where there was neither TV nor Internet (nor neighbors, nor much food!) to distract me, so that I could focus and edit. And I thanked Shane at Delirium for believing in my work and supporting it all these years. 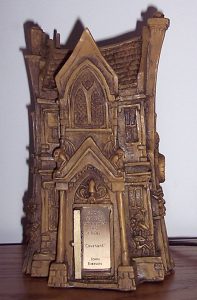 I probably should have written something up ahead of time, on the off-chance. Cuz I guess, you really never know.

Here’s a video of me accepting the award  courtesy of Staci Layne Wilson: 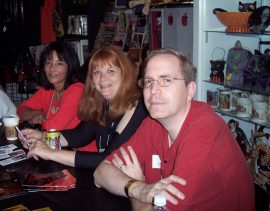 The awards were naturally the defining moment of the weekend, but there were a lot of other memorable events besides. Following the ceremony, I talked a bit with David Morrell about keeping the “writing muscles” in shape after sitting through a great writer workshop he put on earlier in the day, and then spent a lot of time talking with the guys from The Horror Channel, and Alice Henderson and Phoenix Valencia at apost-Stoker “room party” hosted by Eunice Magill.

I’m backing into this, but the day before the Stoker Award ceremony (following a 2-hour shuttle ride from LAX — never fly into LAX if your desination is Burbank) 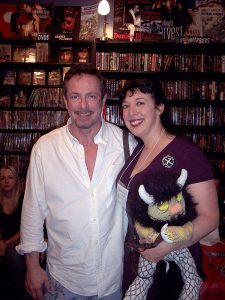 I also performed an apparently well-received reading of the first few chapters of Covenant to a couple dozen people (including Palahniuk!). I also met the ultra-cool con John and Yasmine Palisano (who were everywhere during the weekend helping to keep things running smooth).

After I checked in and chatted with them a bit on Friday, I hung with ol’ con pal Christa Faust at the “Ask the Editors” panel with Del Howison, Nick Mamatas and John Skipp before attending the Twilight Zone reunion panel featuring Richard Matheson (my idol of 25 years!), Dennis Etchison, George Clayton Johnson and Christa (she just did a new Twilight Zone novelization).

Then it was off to the evening reception where I chatted with Bev Vincent and his lovely wife, Gary Braunbeck and Lucy Snyder, and then hooked up with another old pal, 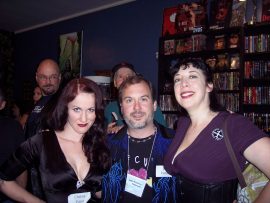 Following a phenomenal reading by Braunbeck, I met Shockliner Josh Boone, who I didn’t get nearly enough time to trade stories with before heading to “The Rolling Darkness Revue” with Peter Atkins, Glen Hirshberg and Etchison reading spooky stories by candlelight over live incidental music. I couldn’t quite make it to the end of the reading, thanks to jet lag, and headed up to bed by midnight. 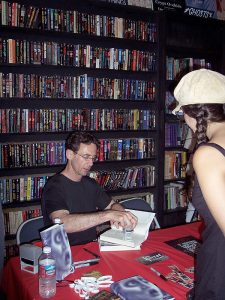 On Saturday, I went to the HWA business meeting, where, despite my best intentions for being a wallflower, I found myself arguing against any suggestions that HWA officers should recuse themselves from Stoker Award consideration during their terms.

I have no friends on nor current aspirations to serve on the HWA board, but I think it’s ludicrous that if somebody produces a phenomenal book, and happens to be an active board member of the HWA at that time, that I as a voter would be unable to recognize them for their acheivement. People are always too hung up on the potential for “bad appearances” and play it too safe, I think. 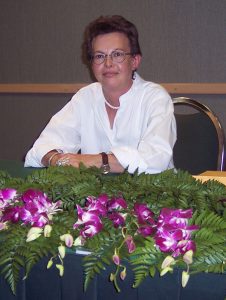 Following the board meeting, I listened to a great classic horror reading by Nancy Etchemendy, who left us all hanging about the end of the story (she ran out of time) and then watched the “Getting the Paperback Deal” panel with Nancy Holder, Deborah LeBlanc, Joe Nassise and Karen Taylor. The key to success? Luck and diligent persistence. Afterwards, I introduced myself and thanked Holder for her outspoken advice during the panel on the innate “inferiority” complexes that writers generally have — she perfectly encapsulated the cycle I’ve always personally gone through at conventions: seeing friends and getting a high emotional spike and then feeling like you’re a complete hack that has no business even pretending to be a writer in such company and hitting a low emotional dirge. “We all go through that,” she promised. 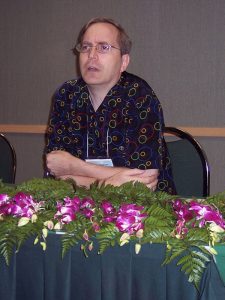 After listening to Bev Vincent read a clever lawnmower/grave story, I sat through some of the horror script panel with the likes of Peter Atkins (Hellraiser) and Eric Red (The Hitcher) before heading to the Dark Delicacies signing. Bev and I hitched a ride with Gary Braunbeck and his crew since our cab didn’t show, and I sat near Nancy Etchemendy through most of the signing (where I inscribed copies of Covenant, Vigilantes of Love, Small Bites and Spooks!).

Mary Anne Mitchell and I admired the cool skeletal cake plates on display, and I ultimately bought a Nightmare Before Christmas bobblehead of Jack, after having my picture taken with Clive Barker and Christa and Maria.

I hitched a ride back to the hotel with Alice and Phoenix and then attended David Morrell’s inspirational Writers Workshop session, where he taught some interesting ways (like interviewing yourself) to jumpstart plots and characterization, as well as how to survive as a writer in the new world of self-marketing. 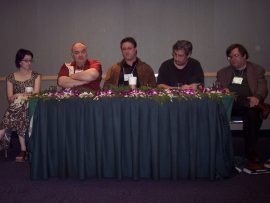 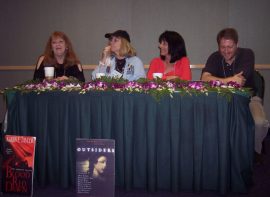 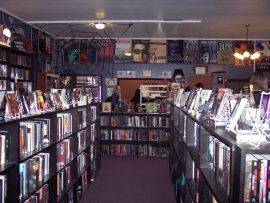 I changed into a strangling tie for dinner and spent some time at the reception with Bev and Nancy. Feo Amante turned up to challenge our nervousnessness with his usual loquacious Texan charm, and then it was time to face the music… Nancy and I staked a table, and the dinner began! I’ve already covered the events of the dinner above, and after shooting a group picture of Stoker winners (unfortunately Clive Barker had escaped by the time the picture was corraled) a party was pulled together in Magill’s room, where I spent a couple hours talking with the guys from The Horror Channel about their plans to launch the new venture over the next few months (see www.horrorchannel.com) as well as talking with Alice and Phoenix about writing and film projects.

It was an amazing evening, and one that I’ll treasure for years to come!

Here is the acceptance speech I read on Shane Ryan Staley’s behalf for the HWA Specialty Press Award given to Delirium Books:

First off, there’s way too many people I need to thank and very little time to do so, so I’m going to keep this as short as possible. Back in 1999 I set out to do one thing…help a few authors get established in the genre. Now in 6 short years, here we are. The majority of the authors I’ve helped are no longer struggling to be known, but are now established. Soon I feel Delirium Books will be known as the small press that established the next generation of big names in this great genre of ours. And this is a great award to accept for this very reason.

I’d like to send out a special thanks to the following people: Brian Keene for his loyalty and friendship, John Everson for his friendship, help and support. Behind the scenes here, a big thank you goes out to Colleen Crary for giving Delirium Books that special look through her beautiful foil stamp artwork, Alan Clark, GAK, Mike Bohatch and Dave Kendall for being the core cover artists, David Marty, Lisa DuMond, Bob Strauss and Don Koish for editorial assistance. I’d also like to thank all of the Delirium authors I’ve published to date…it’s been an honor for me to work with such a talented cast of writers.

And my biggest thanks goes out to the readers and collectors who buy Delirium titles. You guys are the ones that allow me to make Delirium Books my full time job. And for that I can never thank you enough.