Home News SACRIFICING VIRGINS will have a sneak peek debut at HorrorHound Weekend!

SACRIFICING VIRGINS will have a sneak peek debut at HorrorHound Weekend! 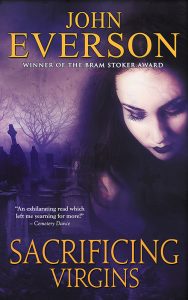 MY FOURTH FULL-LENGTH short story collection, Sacrificing Virgins, is due to be released the first week of December — it’s available for pre-order now on Amazon — but if you’re going to be at HorrorHound Weekend in Indianapolis this weekend, you can grab a preview copy directly from me!

I will be at the Samhain Publishing booth Friday night – Sunday afternoon, and Samhain let me know this week that they will have a sneak peek early printing of the book available there! I can’t wait to see this one myself… nevermind the stories, I love the cover art!

It’s been eight years since my last full-length short fiction collection, Needles & Sins, and with 25 stories and over 110,000 words of fiction, Sacrificing Virgins will be my largest fiction collection to date… hell, it’s my longest book to date period!

Sacrificing Virgins compiles reprints, rarities and a couple never-before-published pieces taken largely from the past 10 years. But it also digs into a few earlier stories that haven’t been previously collected, including the title story, which was originally published in a long out-of-print Delirium Books hardcover anthology called The Dead Inn. Also featured are some of my favorite pieces from hard-to-find anthologies like Relics & Remains, Terrible Beauty, Fearful Symmetry, Gothic Blue Book and two stories published over the last year in the critically acclaimed anthologies Qualia Nous and Eulogies III.

Since my mini-collections Creeptych and Deadly Nightlusts are out of print, this new book also compiles the best (and bulk) of the tales that were in those short books as well. Sacrificing Virgins also includes all of my novel tie-in stories: “Ligeia’s Revenge” originally appeared in translation in an Italian magazine and is a spinoff story of my novel Siren. “Field of Flesh,” which appeared at the start of the year in Dark Discoveries, is a novelette set in the world of NightWhere. And  “The Pumpkin Man” is also included — the original short story that inspired my novel of the same title.

Whether you stop by the Samhain booth at HorrorHound this weekend to say hi and grab a copy or pre-order Sacrificing Virgins on Amazon… I hope you’ll check it out and enjoy this compendium of some of my best short stories from the past decade… and more!