YESTERDAY, I WAS IN TORONTO, on a short 3-day trip for the day job… the upside was, I got to have dinner at Colum “Paperback Horror” McKnight’s house, and he introduced me to a couple of fellow horror authors — Jason Darrick and Tobin Elliott. And I had a chance to visit my old favorite spot there from previous visits – Elephant & Castle. I also got to see a record store… with real records. I wish I could have hung out there and shopped for more than five minutes! 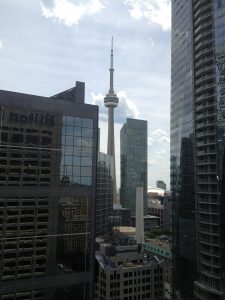 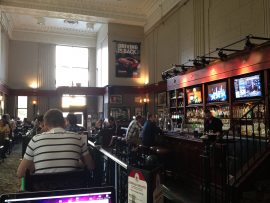 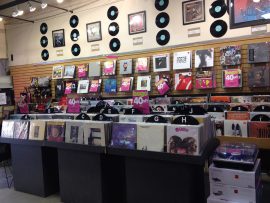 Today, (after getting home late last night) I was in Chicago all day, for the horror “job” — signing books at Printers Row Lit Fest in the Horror Writers Association tent. It was a perfect day – sunny, breezy… a bit hot in the sun, especially since our tent was facing west at the end of the street of tents – but a nice summer day! I met Jeffrey Wilson, a very cool cross-genre horror writer who signed with me for the afternoon, and got to say hi to Jeremy Wagner who was holding down the signing “shift” just ahead of ours. My wife Geri and son Shaun came down and wandered the Lit Fest for awhile before camping in the tent with us, so it was kind of a family affair. Which was nice, since I’ve been gone on business trips much of the past two weeks, and will leave for another one (to Florida) tomorrow morning. 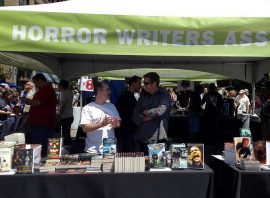 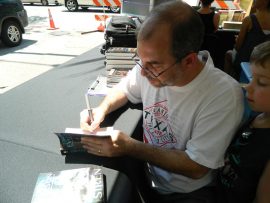 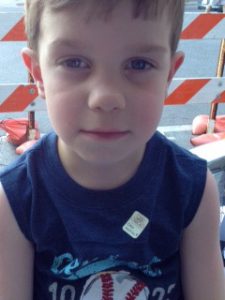 At one point, Shaun said he wanted to be sold, so Martel Sardina – who organized the whole HWA presence at Printers Row –  made up a $1 million price tag, and we set him on the table, ready to make a deal. Of course… we didn’t actually “face him out” because we’re not selling him at any price ?

After the fest, we stopped down at Bar Louie’s for dinner before heading back to the burbs. The air conditioning felt amazing, after a day on our feet in the heat.

Tomorrow, it’s off to Florida, but we’ll be indoors virtually the whole time… which is just as well. I got plenty of sun today!