Home News Peteyboo and the Worm 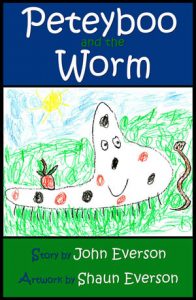 MY SON AND I sometimes tell silly stories to each other, and when he was five, I came up with one that he really liked called Peteyboo and the Worm. He kept asking me to re-tell it to him, and I kept forgetting things each time I did (which he vehemently complained about). Finally, I wrote the whole story down and when he saw the pages he said “when will it be in a book, like your other books?”

So… I created a little chapbook edition of it for him last year and he drew the artwork, based on his ideas of what Peteyboo, a hungry bug with 18 legs and 37 eyes, might look like.

He loved the little chapbook, and it ended up being read a couple times to his kindergarten and first grade classes… which resulted in his friends asking: “how can I get a copy of Peteyboo on my iPad?”

So this month, I went back and worked on Peteyboo again and e-booked the story. If you have kids from 5-7 years old (or know parents who do), I hope you’ll take a peek at Peteyboo! That silly extemporaneous story I wrote for my son is now a full-fledged ebook for sale on Amazon for just $0.99: