I LOVE MOVIES almost as much as books. And actually, I really get to enjoy more movies these days than I do books, since it’s a lot easier for me to give up 90 or 100 minutes to a story than several hours. (I know, heresy from a writer, right?)

But as much as I love film, I don’t remember the names of directors that much. Hitchcock, Argento,  del Torro, sure. But who directed Friday the 13th? Beats me. I have a few directors whose work I devotedly follow (like Jean Rollin) but mostly, I watch movies and don’t recall who was at the helm. 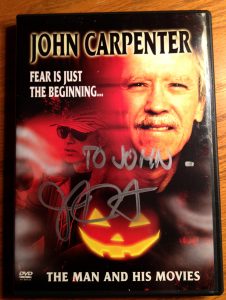 John Carpenter is one of those directors though that I have always been aware of. And I’m shocked when I say his name and people don’t instantly nod (this happened to me just this week. I said “John Carpenter,” and the woman looked back at me blankly and said “who?”)

When I was in high school, I saw Halloween and Escape from New York and The Thing. These were amazing movies, and I became a lifelong Carpenter fan thanks to them. When I was in college, and he enjoyed a “return” to his indie roots with Prince of Darkness, I reviewed the movie for my college newspaper (it remains one of my favorite Carpenter films).

So last weekend, when he was going to be here in the burbs of Chicago at Flashback Weekend, well… of course I HAD to go. I went to Flashback last year for the first time, and was thinking of going there this year as “an author” with a table of books… but instead, I decided to just go, kick back and be a fan for a day instead of “working it”. And my prime goal, of course, was to meet John Carpenter. 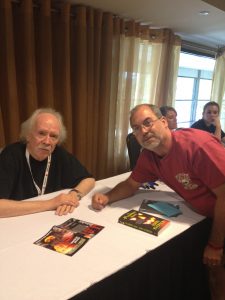 Not only did I meet him, but I ended up autographing a copy of my own book, The Pumpkin Man, to him. I wasn’t sure if he’d accept such a thing, but I asked him if he’d like a copy as he signed a DVD I had of his life story, and he said he would absolutely read it. So John Carpenter and I traded signatures! Will he ever read The Pumpkin Man? I dunno. But I was pretty excited to actually meet the man who has given me so much inspiration and entertainment over the years. And I have to say, I was pretty much a tongue-tied fanboy when I did actually stand there at the table near him. There were so many things I wanted to say to him… and all I got out was basically “I um love um your movies and um… would you like a copy of my book cuz, um… it has a pumpkin on it which is, um, kinda like that movie you made, er, Halloween.”

OK, I think I was a little better than that. But probably not much. 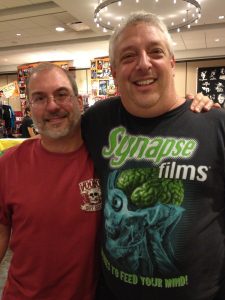 Anyway… it was a fun afternoon. I saw some interviews with various actors from Friday the 13th and Halloween movies (see pix below), as well as one with Tony Todd, the actor from Candyman, one of those films that can creep you out for life.

I also got to hang out with Gerald Chandler, half of the Synapse Films team, at their booth. Jerry started reading my novels after we talked last year at Flashback, so it was great to have some time to catch up again.

I’m looking forward to seeing him and the Synapse team again at Horrorfind Weekend in Gettysburg in a couple weeks. And next time, I’ll be sporting my OWN Synapse t-shirt ? 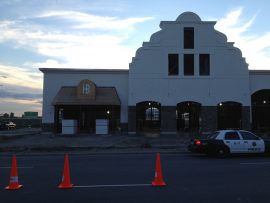 After a day hanging out at media interviews and the dealer’s room, I went over to the new restaurant/nightclub area that has been building up behind the hotel where the convention was held. I’ve been waiting all summer for them to open the new Hofbrauhaus there  (it was scheduled to open in July), since I’ve been to the one in Cincinnati as well as the original in Munich earlier this year. But as you can see… all that is finished so far is the shell and the HB. 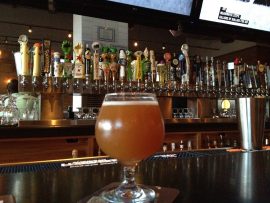 So instead of eating there, I went to the Park Tavern, across the street, which promised “craft beer.” They had a good selection of taps, including one from Flossmoor Station, a brewpub down near my high school that I don’t get to very often these days, since they’re a good 45 minutes south of us.

I tried Flossmoor’s MCAison which was amazing — a summer Belgian ale with a slightly sour rhubarb finish. And Park Tavern had pretty good burgers too. I’ll be back! 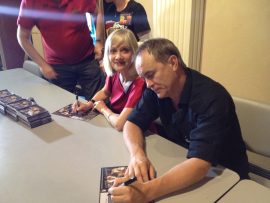 After that, I headed over to the Muvico Theatre across the street, to enjoy some films, including a long-lost 30-minute film called The Evil Clergyman starring Jeffrey Combs and Barbara Crampton from the late ’80s. It was intended to be part of a trilogy movie, but the master was lost 25 years ago, so this film was never released before. But recently a VHS edit copy was found and so the film has been restored from that. It was a gothic kind of ghost story, and afterwards, they interviewed some of the audience on camera  to put together some extras for the DVD. (I did an interview, so who knows, I could end up on the DVD!) 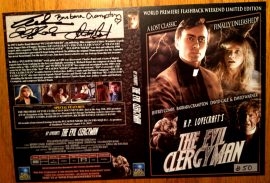 Jeffrey and Barbara, as well as the Band brothers (producer/director and composer, respectively) all signed DVD jackets for the as-yet-unfinished DVD. I bought and had them sign #50, which should be mailed to me in a few weeks.

After that, I watched a couple movies from Rob Zombie’s Halloween actresses Kristina Klebe and Danielle Harris. Klebe offered a short film school exercise which was interesting, but Harris debuted a full feature film called Among Friends which was really strong. I hope this one gets a decent release, as I really enjoyed its damning commentary on friends who are really only friends “on the surface”. The movie followed a bunch of L.A. friends who go to a party only to find that they’re playing a game with the hostess. A game where she is judge and jury (thanks to some paralysis drugs and videotape) over their selfish actions against each other.

Overall, it was a great afternoon and night with fellow horror fans!

Here are some photos from the panels during the afternoon. 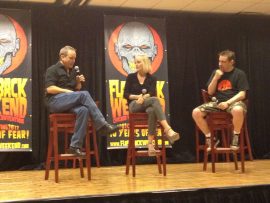 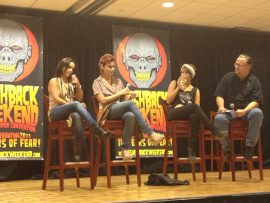 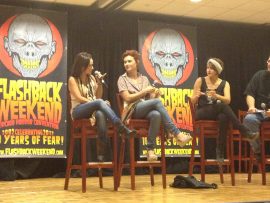 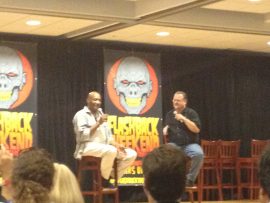 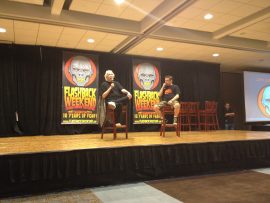 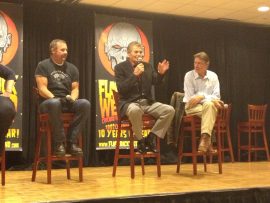 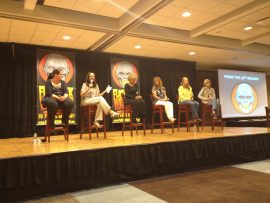