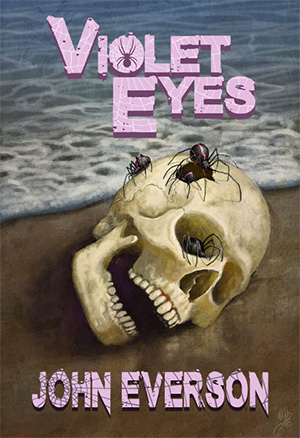 LAST MONTH, Sinister Grin Press began taking pre-orders for the limited, signed and numbered hardcover edition of my 7th novel, the spider-fest, Violet Eyes. This is a special limited collector’s edition of the book, and will only be available on an order basis, so if you want a copy, sign up for it this week — the order period is almost done — Sinister Grin will stop taking orders on January 31st and the book will be shipped in March.

Reserve your copy of the Violet Eyes hardcover at http://sinistergrinpress.com/

This is the first hardcover release I’ve had since Bad Moon Books unveiled the limited edition of NightWhere in 2013, so I’m looking forward to holding a copy in my hands. I’m actually signing the signature sheets  on my desk right now so I can send them back to the publisher this week! (See pix below)

In addition to the novel, the Sinister Grin edition of Violet Eyes will also include the expanded prologue story, Violet Lagoon as an extra. Violet Lagoon was originally intended to serve as the prologue to this book, and was published a couple years ahead of the novel. But it ended up too long to be a prologue, so when I finally wrote the novel, I used pieces of it, but not the whole thing. That original novelette will be included in its entirety in this edition. 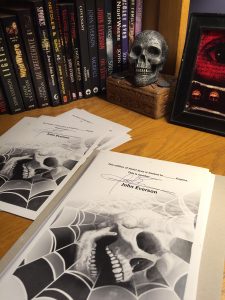 Check it out, only at http://sinistergrinpress.com/