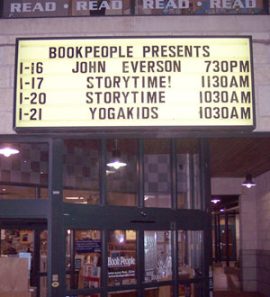 I’VE NOT EVER KEPT it a secret that if given the choice, I’d relocate to Austin or San Francisco in a heartbeat. They are my two favorite cities in the U.S.  So you can imagine how happy I’ve been for the past five days since I got to run a business meeting in Austin for my dayjob.

And while it wasn’t sunny and 75 while I was there (it hung mostly in the 50s), the weather was a heck of a lot better than the 20 below zero thing that was going on back home!

While I was in Austin, I got the chance to do a couple booksignings. The first was on January 16 at BookPeople, where I actually got to see my name up on an actual marquee! It was pretty cool to get out of the cab in front of a store and see your name in lights. 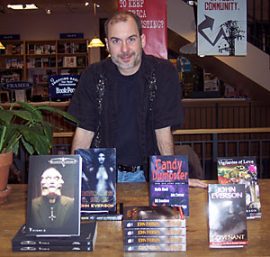 The customers in the store heard me read “The Right Instrument,” one of my flash fiction pieces that is always good for a reading, as well as the first couple segments from Covenant.

It was pretty cool to see The Horror Library Vol. 3 in the store, as I have a short story called “Fish Bait” in that anthology, and it was right there on a new releases rack when I walked into BookPeople. We put some copies on my signing table for the night.

After the event, I went down the street to eat at an Indian place, The Clay Pit, where I had the best Indian food I’ve ever tasted. I ordered the Mirch Masala curry with chicken, and just typing about it three days later is making my mouth water. I’m going to have to hunt for good Indian restaurants in this area now.

On Saturday, I sampled the awesome burritos at Freebirds, just down the street from the hotel (our meeting was serving salmon, so I took a walk!) 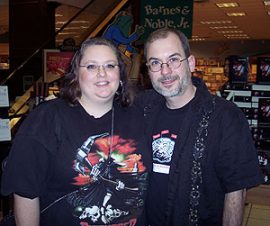 That night after work I had a signing at the Barnes & Noble by the Austin Arboretum, which was great fun – Janice, the manager there, was wonderful, and the store was busy all night. One of my MySpace friends — Melissa — actually drove up five hours to attend. It was great to finally meet her, as we’ve chatted on and off for a couple years.

She has read most of my small press releases, but I signed a copy of Covenant for her, and gave her a copy of the cover flat for Sacrifice.

I also met a couple other folks who came specifically for the signing, including one horror fan who saw the calendar listing for the signing on the Leisure Books website while in the middle of preparing dinner. He said he turned off dinner and hopped in the car immediately because he wanted to get a signed copy when I saw that I was in town. I hope when he got back home that his dinner was edible! 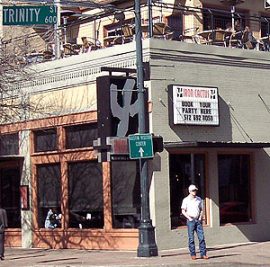 After the signing, I headed back downtown to 6th Street, and had dinner on the roof of one of my favorite Austin haunts, the Iron Cactus.

The “Perfect Marguerita” (martini style) remains perfect (hard to beat Patron Silver). Unfortunately, they didn’t have my Chile Relleno on the menu anymore, but the fajitas were good, and I bought a shirt to replace my previous Iron Cactus T, which is starting to fade from a few years of use.

I hung out the rest of the night at my favorite Austin club, Elysium (which is where the opening chapter to Sacrifice is set). It was the first time I’ve been in Austin since finishing the novel three years ago, and it was very cool to walk the path Ariana walks from Elysium to the Marriott (which has since changed to a Sheraton). I also met John, the owner of Elysium, who bought me a “blood shot” as I told him a little about the book that “starts” in his club. I wish I could get back to Austin this summer once Sacrifice is out to do something with the club to “launch” it.

I closed Elysium (all the bars shut down at 2 a.m. there) and ducked into the Red Eyed Fly a couple doors down just in time to buy another t-shirt there to replace my old faded one (I wear a lot of Austin cotton LOL). 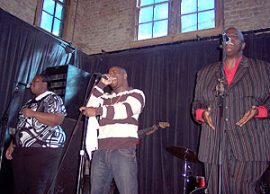 The next morning, I enjoyed another Austin tradition for me — Gospel Brunch at Stubbs. The two-floor barbecue house has a stage set up downstairs (the main level ends in a balcony overlooking the stage) and every Sunday they do two seatings for brunch – a wonderful mix of eggs, sausage, bacon, grits, barbecue pork and chicken, and more. Meanwhile, on the stage, an R&B/Gospel acts plays some standards for an hour (“Jesus on the Mainline” was one of my favorites from Sunday’s act, who were phenomenally entertaining.)

After a walk down 6th street, it was too quickly time to head to the airport… but as always, Austin did not disappoint. I can’t wait to go back.