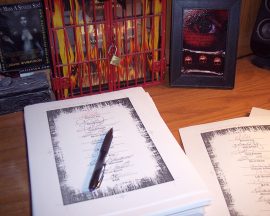 IT’s BEEN A MONTH of signing Necro Publications signature sheets for me! A couple weeks ago I signed all the inside pages for the hardcover edition of my novel, The 13th, which Necro will issue next month. And last night I finished signing a stack of 500 signature sheets for the anthology Infernally Yours, which Necro will also be issuing in a month or two. Click on the photo at right to see a larger version of the photo, where, in the righthand sheet, you can see where John Shirley signed one of his signatures using a mirror (compare second sig down to the sheet on the left). How’d you do that John???

This book is a tribute to Edward Lee‘s “Infernal” series of novels about the Mephistopolis… the city of hell. I’m especially proud to have contributed a story to the anthology since I love, love, love Lee’s Infernal novels. I read the first one in one sitting out on my deck on the 4th of July a few years back — and skipped the fireworks that night in order to finish it!

Infernally Yours includes a gang of horror visionaries spinning their own yarns on Lee’s Infernal mythos. It’s a gang who I truly respect – John Shirley, Brian Keene, Charlee Jacob, Maynard and Sims, Gerard Houarner and Bryan Smith. To top it off, there’s a new novella to lead it off by Edward Lee himself.

Today, I dropped the signature sheets off at the press for Necro (while Necro is in Florida,  I happen to live just a few miles from where the books are printed, in the west burbs of Chicago!)

Signing that last sheet and dropping the stack at the printer is the end of a long road for this book. Necro Publisher David Barnett and editor/artist GAK first talked to me about being a part of the project that would become Infernally Yours during the World Horror Convention in San Francisco, three years ago. My contribution, “Then Shall The Reign of Lucifer End” was done about six months later. A couple years passed before all the rest of the stories were in, and then last fall, I helped proof the book (ironically, I was copyediting Lee’s latest vision of hell while taking my son on his first vacation to Disney World!) It took a few more months after that still to finish all the artwork. But now, finally, the presses are about to roll on it.

All I can say is, it’s going to be a helluva book!