Discovering the claws of PETS… 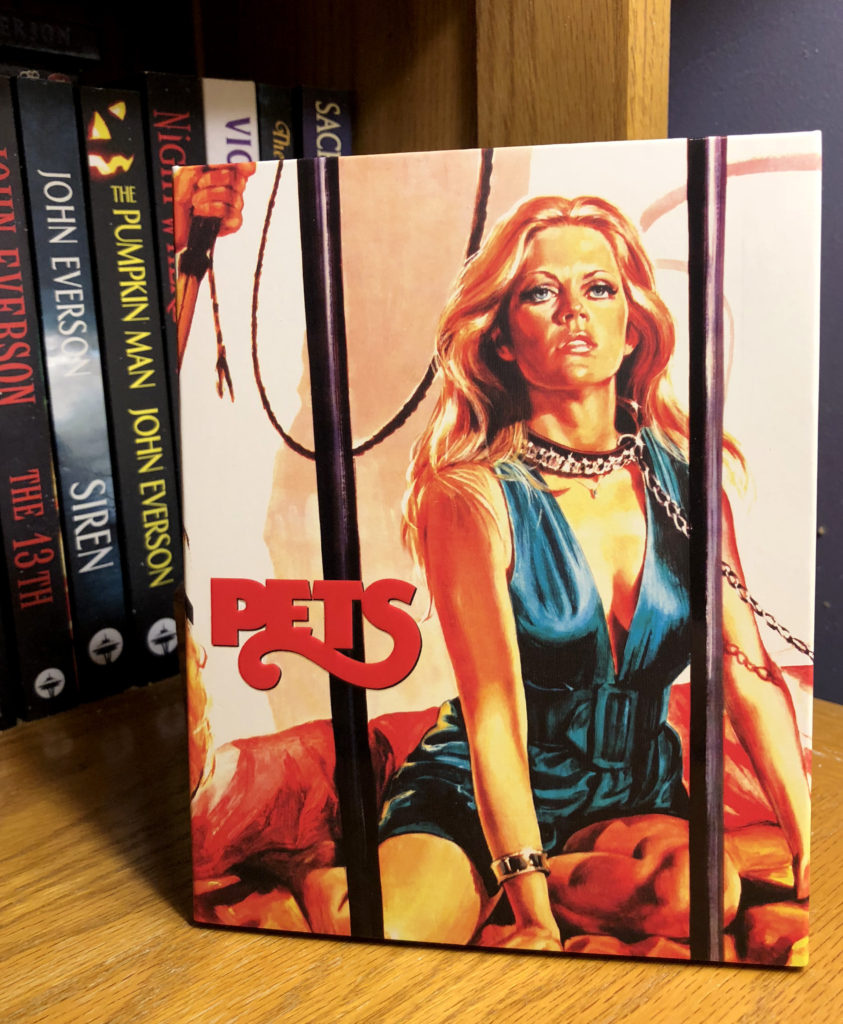 I LOVE FILM, and over the years I’ve gone through many “discovery” phases, where my curiosity drives me to focus on watching a particular genre of movies for an extended time (horror, noir, b/w ’50s sci-fi…). Over the past few years, I’ve been obsessed with European horror, drive-in, grindhouse and exploitation movies from the ’60s-’80s. I’ve gone through periods of focusing on the work of directors like Jean Rollin, Dario Argento, Lucio Fulci, Mario Bava, Jess Franco, Alejandro Jodorowsky and Alain Robbe-Grillet as well as following film companies that specialize in the kind of obscure films I love — like Synapse, Mondo Macabre, Severin, Shameless and most recently, Vinegar Syndrome, who recently released a restoration of the film I’m focusing on tonight — Pets.

I keep a spreadsheet on what I watch every weekend, and over the past five years it has clocked in between 80-90 movies a year, with the vast majority being films made before 1990.  At this point, I’ve seen a LOT of old obscure movies, so it’s more and more of a treat when I discover a really good film that I’d never seen or heard of before. Last weekend, I had the joy of discovering one of those. When the end credits played on Pets, I sat back and said “where has this movie been all my life?!”

Vinegar Syndrome does big twice a year sales, and last month for their “Halfway to Black Friday” sale, they unveiled a surprise 2K restoration release of Pets, a 1973 exploitation film by Raphael Nussbaum based on a three-act stage play by Richard Reich (who also wrote the screenplay). I’d never heard of it before, but there’s a great article about the work’s transition from play to film at Temple of Schlock.

The film apparently follows the structure of the play for the most part, though the movie changed the narrative from being three independent mini-plays about human relationships to a linear narrative with three key acts following Bonnie, a provocative runaway played by Candice Rialson who moves from one “kept” relationship to another. The subtext of the original play (critiqued on its original performance as ‘heavy-handed’)  is really what makes this grindhouse action/drama/touch-of-horror film so much fun. Because in the midst of the tease and schlock there actually is a bit of a message about how humans often treat each other as sexual pets vs. equals. But… as the ’70s movie posters proclaimed, pets have claws…

Pets opens with Bonnie being driven back home by her abusive brother, who apparently has come 200 miles to reclaim her after she’s run away. But Bonnie isn’t going to be taken back to captivity so easily, and uses her wiles to escape, escalating a bad situation and abandoning her brother to an angry mob. You’ve got to love dialogue that includes phrases like “jive ass honky.” She leaves her brother to be beaten up and walks the empty streets and beach as the opening credits roll before hooking up with a streetwise girl named Pat who offers her a cigarette and takes her under her wing briefly.

Pat is nobody’s pet, and when Bonnie spies a weapon in her purse, she asks “What do you carry a gun for?”  Pat doesn’t mince words: “To avoid the hassle of being raped, can you dig that?”

Pat also encapsulates Bonnie’s character for us early on, calling Bonnie: “foxy” and noting, “men really go for you don’t they – you look like a… a little kitten.” At the same time she also telegraphs her hatred of dogs (because, people are usually cat or dog lovers, right?) 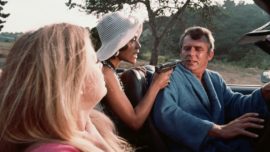 The dog in question belongs to Dan, a convertible owner who they convince to take them for a ride… but Pat’s goal isn’t what it seems. As Bonnie cuddles with the dog and hikes up her skirt in the front seat — sex is always her weapon — Pat is pulling out her gun in the back seat and changes their joyride to a robbery. They pull over onto an empty road in the beachside hills and Pat leaves Bonnie to keep an eye on Dan while she goes back to rob his house. The dialogue between the two, as Bonnie flaunts herself and asks him, “What do you want, lapdog?” sets the stage for Bonnie’s outlook in the rest of the film. Ultimately, in this scene, she treats Dan as a pet for her own pleasure, taunting, “I’ll show you… Helpless, the way I’ve always been. Hands tied.”

She eventually abandons her captive “pet” the way she is abandoned by Pat, and moves to “act two” of the film, where she is adopted by Geraldine, a female artist who invites her back to her house. 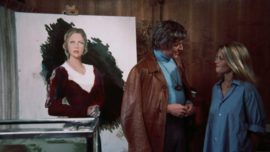 Bonnie agrees to serve as a live-in model for the woman, who quickly seduces Bonnie. But Bonnie still lives to conquer men with her looks which brings out the jealousy in Geraldine. The artist’s cheerful benevolence soon turns dark — the beach refuge becomes a prison as Geraldine grows more possessive and prevents Bonnie from going into town to stop her from indulging in any flings.

Meanwhile, an art gallery owner and collector becomes intrigued with the power of the new paintings Geraldine is producing of this increasingly seductive looking model. He buys one and commissions more. And has a strong interest in meeting the model. 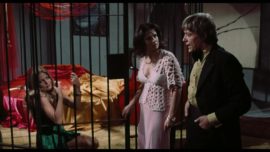 When Geraldine’s means of caging her “pet” goes violently south, the collector is the final “savior” of Bonnie… And as it turns out, he maintains a whole menagerie of pets, some of which take the whip to keep in line (leading to the provocative cover movie poster and DVD cover art the film has always had).

Bonnie soon finds that the prison of his relationship is the most overt of all. But pets have a way of getting their own way, even when in captivity, don’t they?

This film grabbed me from the opening, when Bonnie effectively sacrifices her brother to win her own freedom. It’s not the kind of film that will appeal to those weaned on Hollywood blockbusters; Pets is a product of its time — and that’s part of the joy of watching it. To hear the music and slang and see the styles and attitudes of the early ’70s. It’s definitely not for those constrained by “PC” sensibilities.

This is a grindhouse movie, so you know that you’re going to get some sleaze and tease factor, but it also has something to say… and does so with some bizarre situations and twists. If you enjoy stepping back into the vibe and style of early ’70s grindhouse films as I do, you will love this one.

Take a closer look at Pets at: