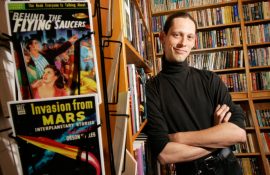 Borderlands Books in San Francisco is being forced to close.

Independent bookstores are always a slim margin business, and the new minimum wage hike voted in for San Francisco will ultimately up their payroll expenses by nearly 40%. The bookstore is stable now, but will not be viable once the law fully takes effect.

Borderlands has been in my life for most of the years I’ve written fiction. They always supported my work, and always stocked the releases of my small press, Dark Arts Books. Back in the early 2000s, they used to sponsor a huge all-night party at the World Horror Convention (WHC) every year. That party was as much a reason to go to the con as all the rest of the activities! I met Richard Laymon at the very first Borderlands Party I went to, just a couple years before he died.

I did a booksigning at the Borderlands Store for The 13th back in 2010 with Alice Henderson and I’ve been to a WHC reception there, during the 2006 convention.

I’ve stopped by the store whenever I’ve been in San Francisco. The owners, Alan and Jude, and their staff, are smart, funny, amazing people. I can’t imagine the feelings that they are having over this, but I can say this much: Borderlands was one-of-a-kind. For nearly 20 years, it’s been a beacon for SF/F/H book fans around the country. And that light is now soon to go black.

Update 2/8: there’s a great story in The New Yorker about the Borderlands closure:
http://www.newyorker.com/business/currency/minimum-wage-dilemma-san-francisco