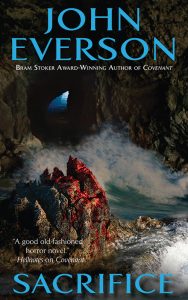 Famous Monsters of Filmland posted the first review of Sacrifice in March 2009 and “highly recommended” the book.

Shroud Magazine called Sacrifice “a guilty pleasure, the kind of novel we’re all afraid our parents will discover we’ve been reading late at night, under the covers with the flashlight on.”
>> Read the full review.

Horror World wrote “Sacrifice is a Screaming Orgasm followed by a shot of Jack Daniels. This is a novel that begs to be finished in one night, and likely will be.”

Hell Notes said “John Everson manages in Sacrifice to dispense buckets of blood, provide edgy perversity, and walk the tenuous tightrope of horror and sex without falling: It’s rather an amazing feat.”
>> Read the full review.

The Horror Fiction Review wrote in its June 2009 issue: “Perhaps a bit like an adult version of the classic cult film CARNIVAL OF SOULS, Everson has truly made his mark on the genre and is taking no prisoners; SACRIFICE is hardcore horror that passes its predecessor by bounds. The squeamish need not apply.

Ttzuma posted his full review on the Horror World Message Boards, noting “Where Covenant’s pace was such that it built tension slowly while it delved deeply into characterization, Sacrifice is its opposite. It is a ball’s to the wall, action packed, take no prisoners follow up. This book will have you at the edge of your seat with its scenes of supernatural horror, excessive gore, and debauched sex.”