Home News and Reviews Reviews of The 13th

Reviews of The 13th 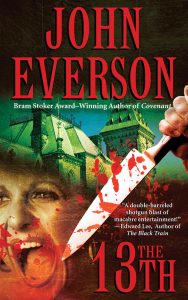 Rue Morgue reviewed The 13th in its Jan/Feb 2010 issue and said “When an abandoned, notoriously haunted hotel reopens as an insane asylum for pregnant women, you just know that trouble’s a’ brewin’. …Gorehounds take note: blood spills from the first page to the last in this disturbing thriller.

The Horror Review said The 13th “hits you hard from chapter to chapter right until the very end” in their January 2010 edition.

The Horror Fiction Review called The 13th “more addictive than crack” in their January 2010 review.

Hellnotes dubbed The 13th a “warped ecstatic rhapsody” in their 2009 review.

B Through Z Magazine published an interview with me, as well as a review of The 13th.

Dark Scribe Magazine published an interview with me as well as a review of The 13th.

The Shroud Magazine has published an interview with me, as well as reviewed The 13th on Amazon.

The Monster Librarian has posted two reviews of The 13th!

Read more about The 13th