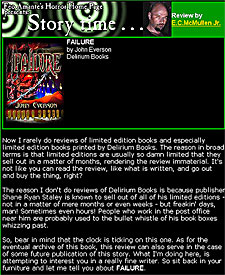 Now I rarely do reviews of limited edition books and especially limited edition books printed by Delirium Books. The reason in broad terms is that limited editions are usually so damn limited that they sell out in a matter of months, rendering the review immaterial…So, bear in mind that the clock is ticking on this one. As for the eventual archive of this book, this review can also serve in the case of some future publication of this story. What I’m doing here, is attempting to interest you in a really fine writer. So sit back in your furniture and let me tell you about FAILURE.

…It’s not easy to make a reader care about people who don’t care about themselves, and FAILURE likely couldn’t hold interest if it had to span across the typical 80,000 plus words of a standard sized modern novel. But Everson also adds innocents to the mix who stumble into the paths of Raymond, Sal, Cindy, and Aaron. That plus the fact that I got so involved in what Aaron was trying to do that I became genuinely curious over whether or not he could pull it off. With a title like FAILURE, I suspected that Aaron would probably mess up, but if and how he would mess up kept me hooked…

>> Read the full review at FeoAmante.com.

Failure is one nasty tale — full of evil spells and bloodshed. It’s fast-paced and unforgettable. Delirium Books has started a beautiful collection of chapbooks, this being #1. They are hardbacks that fit in the palm of your hand. There will be 500 numbered, signed copies.

Nice job, Shane Ryan Staley, on putting out a great looking publication and wicked work on the creation of Failure, John Everson.

This is the first in a series of planned chapbooks by everyone’s favorite small press, and I must say that the book itself is simply gorgeous; a very colorful wrap-around (hard) cover, easy to read type, and a neat small size (just over 6” x 4”) begs to be read in one sitting. I don’t know if too many people outside of the serious book-collector scene will want to pluck $19.99 down for this, but fans of small press horror will want it on their shelf.

Oh yes . . . did I mention the story is kind-of like reading a novella-length version of lyrics to a Slayer song? Some old kook named Aaron cons three high school students into performing a threesome inside of a pentagram on his basement floor, and before long one of the girls becomes pregnant with a demon. Author Everson thanks Charlee Jacob and Edward Lee for the inspiration, and the ending of this short (but sick) chapbook will thrill fans of extreme horror (the birth scene is disturbing, gross, and over the top). Although horror stories packed with sex and extreme violence are not my personal cup of tea, I must say that Failure is an impressive, fast-paced read that shoves your face into the sleaze and then takes off like a drive-by shooting. For a short story, this sucker packs quite a punch. (NOTE: This book is limited to 500 signed copies. Visit www.deliriumbooks.com for availability).

Well I suppose I should start today with a personal statement. Hello, my name is JMB and I’m addicted to collecting books. (SOB, SOB) There I’ve said it. I’m a collector! I collect them all, limited editions, magazines, chapbooks, everything, at least that I can afford. I’m sure it must drive my wife crazy but I guess she loves me enough to not say anything, in fact she even contributes to my addiction at Christmas and on my birthday. So I’m lucky in that regard but I guess I’m one of those book geeks after all. Oh well there’s worse things to be in life and I really do love my books. Okay, you must be wondering why I have just made that completely ridiculous statement. Well I’ll tell you, it’s because of a new chapbook called Failure by John Everson. This new chapbook is without a doubt the coolest chapbook of the year. It’s not only a great story but also appeals to my book addiction as well. Now I want to talk about that some more, but I don’t want to take anything away from the story itself because it really is a good one.

Failure is about a trio of teens who become entangled with Aaron, an old man immersed in the dark arts of witchcraft who is trying to resurrect the spirit of a witch. In order to do this he is going to need a little assistance from Raymond, Sal, and Cind. When we first meet Raymond he is trying to commit suicide to no avail. Sal’s a looser who spends most of his time smoking dope and trying to get laid, and Cind is an extremely loose girl who would do anything (and anyone) for some weed. When these three fall into the twisted clutches of Aaron their fates are sealed. But remember the name of this book is Failure and you’ll soon learn that everyone here is a dismal failure at everything they do.

For a chapbook, this is now one of my favorites. When I started reading I wasn’t sure if I was going to be able to get into it because the first several “chapters” jumps from character to character and honestly I had a little trouble keeping up at first. Once I grasped this concept I was hooked into the story, which moves forward accompanied by flashbacks which explain the desperate situation that Raymond, Sal, and Cind now find themselves in.

Failure was published by Delirium Books as the first book in their hardcover chapbook series. Yes I said hardcover chapbook and let me tell you from a collectors view point this book is truly top of its class. The book itself is smaller than most chapbooks, measuring only about four and a half inches wide by six inches tall. It doesn’t feature a dust jacket, however the front and back features full color artwork. Failure was published in a limited run of only 500 signed and numbered copies and retails for $19.95. At the time of this review Delirium still had this item available. You can also purchase a Chapbook Series subscription for $90.00 and get the first six books in the series, as they are published with matching numbers.

This was my first experience reading John Everson’s work and let me tell you I’m impressed. I really have to give high marks to both Everson and Delirium Books for putting together such a great little book here in Failure. Delirium has come up with a fantastic product in the design of their new chapbook, but they also have paired with a very talented writer in John Everson to create one heck of a great book.

It’s hard to keep from exclaiming “What a cute little book!” when faced with this first of a new hardcover chapbook series from reliable Delirium Books. With no insult intended, it is a very cute package—a miniature hardcover measuring about 4.5″ × 6.25″ and sporting a full-color wraparound library-type binding (no dust jacket). It’s different enough to grab your attention just based on its physical appearance, enhanced by the slick cover art. What’s inside? 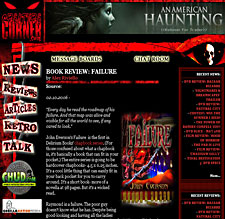 “Every day he read the roadmap of his failure. And that map was alive and visible for all the world to see, if any cared to look.”

John Everson’s Failure is the first in Delirium Books’ chapbook series . (For those confused about what a chapbook is, it’s basically a book that can fit in your pocket.) The entire series is going to be hardcover chapbooks- 4.5 x 6.25 inches. It’s a cool little thing that can easily fit in your back pocket for you to carry around. It’s a short book- more of a novella at 98 pages. But it’s a wicked read.

Raymond is a failure. The poor guy doesn’t know what he has. Despite being good-looking and having all the ladies swarming him, he can’t get the thought of suicide out of his head. He’s a failure at that too, though. He’s tried to kill himself numerous times, never quite achieving his desired result. His friend Sal’s a loser too, but at least he recognizes what he is.

The story brings us to a day that changes all of their lives. We learn about events that happened 6 months ago. Sal, a horny guy with no release, was offered weed and the possibility of sex with a girl by a mysterious man who claimed to be a wizard. The man wanted to perform a ritual, in which he needed 3 people in any combination- as long as there was at least one girl involved. Sal knows that he couldn’t get two girls on his own, so he commisions his best friend to pick a girl that would be into getting a year’s worth of pot for a single sex act. They find one easily — Cind — a girl who would suck a guy off for a dimebag. She agrees to it and they all head to the weird guy’s house. At this point they still think that the guy’s just a crackpot- a sex junkie who wants to watch high school kids fuck for his own pleasure. They very shortly find out he’s not. The room really is set up for a ritual… pentagram drawn on the floor, hooks hanging from chains above, and the wizard dressed up in full garb. The weed is what does it. It’s some powerful stuff, and drives their inhibitions away from them…

This is a sick story…Everson manages to prey on one of most women’s greatest fears. The end is really graphic, and even a seasoned horror veteran like me felt his stomach churning a bit at the depictions. There’s honestly not that much to the story, but it does what any short horror story should do. It manages to shock you with a quick read.

Delirium Books are all about their collector’s editions, and this series is no different. The book’s a signed, limited edition (only 500 made) and the artwork is amazing. The only drawback to this is that the book costs 20 bucks. For $90 you can get a 6-book subscription, which is actually a damn good deal. These would look great lined up on your bookcase.

Judging from the first, there’s no limits to what the authors can do- so it’ll be interesting to see where this line goes.

I just finished reading FAILURE yesterday. What a fast, fun and nasty read. After I was finished I had to run over my eyes with a belt sander for an hour or so to partially remove the images you nailgunned up there.

Available in e-book and audiobook on Amazon.com.