Off the beaten Halloween path:
lost classics and new haunts on DVD 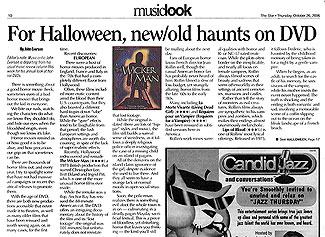 There is something about the adrenaline rush of a good horror movie (heck, sometimes even of a bad horror movie) that brings out the kid in everyone. We bite our nails, watching the characters do what we know they shouldn’t do, and hide our eyes when the bloodshed erupts, even though we know it’s fake. And afterwards, when we turn out the lights in the house to go to bed…we look back and forth over our shoulders for the “monster”, and the heart pounds faster.

Horror movies remind us of how good it is to be alive, and how precarious our grip on that sometimes can be.

There are literally thousands of horror films out there, and every year at this time, I try to seek out some to spotlight that have not had massive ad campaigns or recent theatrical releases to promote them. With the age of DVD, there are both new productions easily accessible that never made it to theaters, as well as many older films that have been reissued that are worth seeing again…or, in many cases, for the first time. Following are a few recent discoveries. 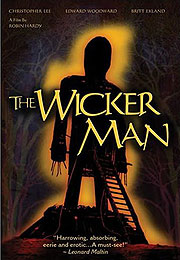 Recently, Hollywood rediscovered and remade The Wicker Man, a 1973 British production that starred Christopher Lee, Britt Ekland and Ingrid Pitt, which is one of the more unusual horror films ever made. While the remake was a flop, Anchor Bay has reissued the original 88-minute American cut of the film.

The DVD offers an intriguing documentary about the history of the film and its “lost footage” (the original movie was 101 minutes) but unfortunately does not reinstate that lost footage. While the original is certainly dated (there are lots of “hippie” styles and music throughout), the film still builds a surreal sense of weirdness, as it follows a deeply religious police officer investigating the case of a missing child on an island populated by pagans. All of the denizens on the remote island claim ignorance of the girl, despite evidence that she used to live there…And they all seem to have a strange lack of normal morals in open social situations. Soon, the policeman realizes that there is something evil afoot that the whole town is in on – culminating in a pagan Mayday sacrificial festival of deadly import.

This is a piece of bloodless yet disturbing social horror that leaves you thinking at its end – it’s the kind you’ll still be mulling about on many levels the next day. 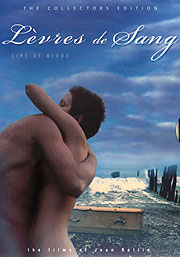 Fans of European horror know the name of French director Jean Rollin well, though the casual horror fan in the U.S. has probably never heard of him. Rollin filmed a slew of low budget yet strangely alluring horror films from the late ‘60s to the early ‘80s, and many of them, including La Morte Vivante ( Living Dead Girl ) (****) and Réquiem pour un Vampire ( Requiem for a Vampire ) (****) have been reissued in subtitled versions here in America.

For the serious fan of Rollin’s work however, Encore Films, a company in the Netherlands, has been issuing lavish three-disc sets restoring his films, including the above-mentioned titles. The color and sound transfers are marvelous, considering that many films rescued from semi-obscurity after 20 or 30 years end up transferred to DVD with loads of artifacts, shaky film segments and garbled soundtracks. Not these! One unfortunate aspect of these reissues is that you need a DVD player that can play region-free PAL version DVDs (computer DVD players can play these, but most American off-the-shelf DVD players for your TV insist on NTSC format discs). But if you love ‘70s era European horror, however, these sets are definitely worth looking for. The most recent releases are Levres de Sang (Lips of Blood) and Les Démoniaques (The Demoniacs).

Both films are issued by Encore as $35 three-disc sets which include remastered versions of the original films, interviews with the director and some of the cast members and deleted scenes. Each set also includes early mid-‘60s short b/w films from Rollin, which are fascinating to watch both for the locations he shot in and to see the early aspects of his sureal visual style and themes. 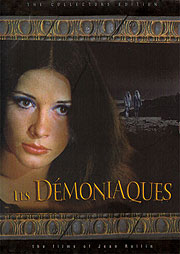 All of Rollins’ work mixes surreal qualities with horror and R or NC-17 rated eroticism. While the plots often border on the inexplicable, and nearly all focus on female vampires, Rollin always filmed scenes of beauty and sadness that seem otherworldly in their settings of ancient cemeteries and mansions and castles. Rather than tell the story of monsters as evil creatures, Rollin’s films always are sympathetic to his vampires and zombies, which makes their endings almost unanimously melancholic.

Lips of Blood is one of Rollins’ most lyrical offerings. Released in 1975, if follows Frederic, who is haunted by the childhood memory of being taken in for a night by a gentle vampire. When he begins as an adult to search for the castle of his memory, he begins seeing visions of the vampire while his mother insists the event never happened. The truth behind his memory of the vampire is shocking and the taboo ending of the film is both romantic and sad, involving a memorable scene of a coffin slipping out to the ocean on the bleak landscape of a French beach.

The Demoniacs is a very different sort of film for Rollin. The director filmed it 30 years ago in the fashion of an old serial movie – it could almost have been a silent film, relying on exaggerated facial expressions and body motions to tell its story of a pirate band that rapes and murders two girls on a lonely beach…but the beach turns out to be near the realm of an imprisoned demonic figure who offers the girls a chance for revenge. The movie is a very odd mix of horrible actions played by the cast with almost a slapstick attack. There are sinister clowns, a pirate girl with an unabashed love of blood and sadism, and a seer who knows of the evil imprisoned in an old cathedral.

For more information on these and other Rollin films, check www.encore-films.com. 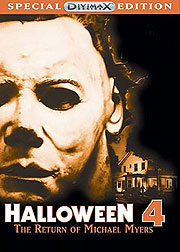 Anchor Bay has reissued some of the classic Halloween movie franchise, as well as a documentary about the films that began with John Carpenter’s classic, ironically near-bloodless “slasher” film, Halloween, which starred a young Jamie Lee Curtis. Most people have seen at least the first, if not the second film in the series. But many never got to Halloween 4 or 5, after the inexplicable left turn of Halloween 3 (which had nothing at all to do with the first two films).

I watched Halloween 4 this month, and if you haven’t ever seen the movie, it’s worth a look. It picks up 10 years after killer Michael Myers was apparently burned to death in Halloween 2. But, of course, he wasn’t. He’s been sedated in a hospital most of this time, and guess what happens when they try to transfer him to a different institution? Yep, the sedation doesn’t hold, and the ski-masked killer is set loose on his old hunting ground again, this time to stalk the daughter of Jamie Lee Curtis’ original character.

Donald Pleasance (the only recurring character from the first two films) returned for this and Halloween 5.

New but not on the big screen: 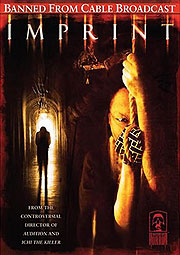 Jumping in this quick survey from old movies to brand new, the Showtime channel has been running a series of original one-hour movies produced under the series title “Masters of Horror.” For those who don’t have Showtime, the programs have been released on DVD and include notable entries from directors Dario Argento ( Suspiria ), George Romero ( Night of the Living Dead ), John Carpenter ( Halloween ), Joe Dante ( The Howling ) and many more. For the most part, the mini-movies watch like “Tales from the Crypt” episodes, taken up a notch. But one of them, Imprint from Japanese director Takashi Miike (Audition), took it up a notch too high.

Showtime felt Miike’s mini-movie was too controversial in its depiction of torture that involved fingernail- and gum-piercing (not to mention images of abortion) and refused to show the film on the channel. However, the episode has now been released on DVD.

For jaded horror fans of movies like Saw and High Tension , it may not seem that extreme, but it is an intense, dark story, which follows an American journalist (Billy Drago) in 19 th century Japan, who has come back after many years to find his long lost love, a prostitute he left behind. A deformed courtesan spends the night with him and slowly unravels the horrible truth of what happened to his love. It’s an intense, but strong story well worth viewing by any fan of horror films that have both a brain and a twist behind them. 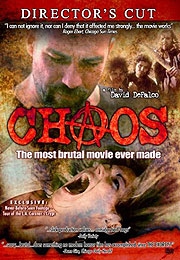 While on the topic of extreme films, here’s one to watch for…and avoid. An independent movie called Chaos is on the shelves and billing itself as “the most brutal movie ever made.” The movie certainly has its rough moments, but there are plenty of movies that are more disturbingly brutal; this is a weak rip-off of Last House on the Left without any redemption for any of the characters. Henry: Portrait of a Serial Killer is a more disturbing picture of unbridled violence and The Devil’s Rejects is a more effective and entertaining movie where the killers are the main characters.

Chaos is a mean, unrelenting movie in sections, as it follows a band of morally bereft thugs led by a former vet named “Chaos” who abduct, rape and murder two girls from a rave party in the woods. It works in the same territory as 1978’s I Spit on Your Grave, but that movie, while dated, is far more emotionally and visually impactful. Ironically, the gritty, cringe-inducing central murders of Chaos become comically trivialized in the ridiculous keystone cops body count of its ending.

The DVD includes a documentary which unfortunately also undercuts the impact of the movie, as the director spends most of his time posturing and whinily refuting the zero star critique of the film by Roger Ebert, despite the fact that the disc pulled a quote from the film critic for the DVD cover that sounds complimentary (“I can not ignore it, nor can I deny that it affected me strongly…the movie works.”) 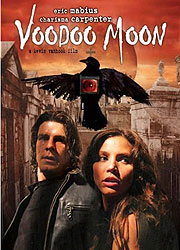 More entertaining is another new straight-to-DVD movie, Voodoo Moon, from Anchor Bay. With a cast culled from Resident Evil, Buffy the Vampire Slayer, Re-Animator and The Howling, there is some good acting in the low budget picture, which suffers a bit in its effects execution, but has a decent story if you love an old fashioned good vs. supernatural evil fight.

The movie follows Cole, an exorcist has been battling a demon around the globe. The story picks up as Cole reunites with his artist sister to return to their home for a last battle with the demon – their home where a massacre left them as the only survivors 20 years before. A band of oddly lovable characters collects to help him in his quest, including Jeffrey Combs (who puts in a great performance as a decaying ex-cop). Voodoo Moon is not a great movie…but it is a fun one.

These are just a few of the off-the-beaten path films you can find lurking on the shelves of Best Buy or via Internet stores like Amazon.com. Skip the latest special effects fiasco from Hollywood, and enjoy some truly unusual dark visions this Halloween season!

John Everson is The Star’s Pop Stops music columnist, as well as the author of the Bram Stoker-award winning horror novel Covenant. For information on his fiction and past horror DVD reviews, see www.johneverson.com.