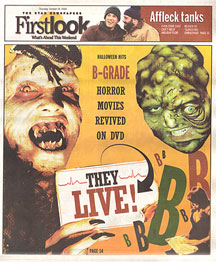 Looking for a scary movie to celebrate the season?

Maybe you’ve already seen all the creepy hits from the last couple years — 28 Days Later, Gothika, House of 1,000 Corpses, etc. — and want something a little more classic or off the beaten path.

With the exponential growth of DVD as the home entertainment format of choice, movie companies have been scrambling to put all their key titles on disc. Now many are looking deeper into the archives to pull out some older, forgotten flicks. This is not always a good thing (some things were meant to stay buried), but it does make for a great selection of bargain movies on the shelf at your local Best Buy or Sam Goody.

Following is a potpourri of current DVD offerings to watch for … or beware of:

The Criterion Collection has made its reputation by issuing critically acclaimed films on high-quality DVDs and its “creepy” offerings this year are not normal horror movies — but they’re not to be missed. 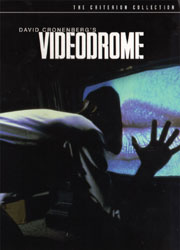 The result is a science fictional horror tale with a profound and frightening subtext. Its hallucinogenic effects by Rick Baker were groundbreaking at the time and still make their mark today. Criterion’s transfer includes some fascinating documentaries and commentaries on the making of the film. 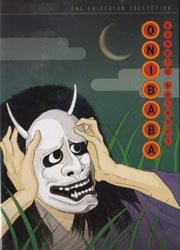 This black-and-white Japanese film by Kaneto Shindo is a lyrically macabre cinematic experience. It examines the isolation and horror in the lives of three people in medieval Japan who rob wayward samurai to stay alive and discard the bodies down a black hole in a field.

Jealousy, dark eroticism and a demon mask soon lead to the movie’s horrific finale. While subtitled foreign films are not for everyone, this one is filled with some striking imagery and visual metaphors.

Shindo’s explanation of the sexual symbolism of the grass and the necessity of shooting in black and white, despite the industry standard of color, are fascinating. 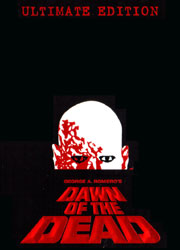 The premise of Dawn… is that it picks up more or less right after the first movie — and the world is being overrun by flesh-eating zombies. A small group of survivors decide that if they can take over an indoor shopping mall, they will have a well-stocked fortress to live in.

In the first half of the film they break into the mall and manage to take out all of the zombies there. But just when the coast looks clear, they find themselves overrun by a group of marauding motorcyclists who manage to find a way into the mall, trailing in their wake a host of new blue-faced living dead.

It’s all played over the top (there’s even a pie fight), and the living dead just aren’t as scary in color makeup as they were in the shadowy Night of the Living Dead.

Still, it’s a fun romp with lots of gunplay, spurting blood, loads and loads of shambling zombies and a bluntly cynical subtext about consumers as zombies. The amount of exploding heads and spurting blood was considered wildly extreme at the time. Anchor Bay’s Ultimate edition should please the rabid zombie fans out there. It includes four DVDs, with the U.S., European and extended versions of the film, along with a disc of documentaries. 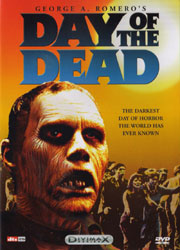 Romero’s return to the zombie movie wasn’t as widely embraced as its predecessor, despite being more dramatic in keeping with the intent of his original film. This one avoids the slapstick of “Dawn …” but still has plenty of human piñatas, and even a zombie who proves that humanity and moral righteousness don’t always rest in the hands of the living.

The movie follows a group of military and scientist types holed up underground, experimenting on the zombies to try to find a cure for the aboveground epidemic. The mad scientist who runs the lab is a wonderful character, and he offers some great gore sequences. The influence of this film on 28 Days Later, a more recent zombie movie, is obvious in the military power trip subplot. 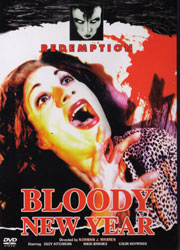 The cover and title of this low-budget British castaway from the ’80s do it a disservice. While flawed in many ways, director Norman Warren’s last film is neither a teen sex comedy nor slasher film. Warren sets us up with a nice mix of youthful characters in an amusement park who flee the wrath of the owners. They end up getting stranded on an island in an abandoned hotel.

But it’s not completely abandoned. The kids keep running into apparent echoes of the past, and soon, one-by-one, begin to disappear. While some of the effects and ghouls are laughable, this is a haunted house story with some weird twists and science fiction back story ideas. 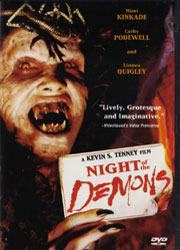 Night of the Demons, 1988
(aka Halloween Party)
(Anchor Bay)

This one stars ’80s scream queen Linnea Quigley and “Dallas”‘s Cathy Podewell. A cartoon opening sequence, buffoonish characters and tired Halloween mooning hooligans can’t ruin the cool creepy setup — a Halloween party in a haunted mortuary. Naturally, the kids wake a demon after an ill-fated séance. Pretty soon they start dying and coming back as zombies to knock off their peers.

My favorite line: after a guy’s eyes have been poked out, a ghoul begs, “What’sa matter … don’tcha like your blind date?” 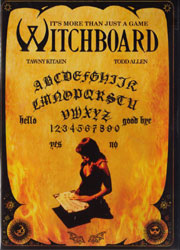 There’s just something creepy about ouija boards. And when Tawny Kitaen’s character decides to keep a ouija from her ex-boyfriend to talk privately with a spirit named David, you just know no-good is going to come of it. Created by the director of Night of the Demons, this one builds through a series of mysterious murders to a satisfying, room-shattering climax.

It also went on to spawn two sequels.

What do babies in jars, spiderwebbed devil worship journals from the 1500s, rampaging pigs and black candles have to do with a Christian military school (and why are they in a room under its chapel)? That’s a good question. This satanic horror vehicle for Ron Howard’s younger brother Clint doesn’t really answer that question. In fact, the film has an amazing number of loose ends.

Unlikely events, like pigs devouring a naked woman in her bathtub, are a bit much to bear. The scene of a bloody, wide-eyed Howard wreaking vengeance on his mean school chums is worth a giggle though. 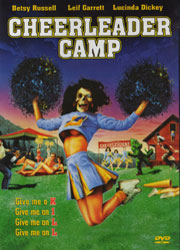 This is as bad as its title implies. Leif Garrett leads a cast of supposed high school cheerleaders (they all look like college graduates) who are at a summer camp in the woods to practice cheerleading. Naturally, after a couple of obligatory topless shots of a Penthouse model and future adult film star Teri Weigel, the girls start dropping dead, and the whodunnit begins.

There is actually less blood and boob exploitation than you might think, but nobody will be taken in by the red herring — a cheerleader who keeps having violent nightmares. The scariest scene may be Garrett stuffing his underwear. 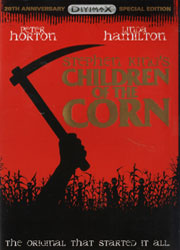 The beginning of the movie is pretty well done. Kids slaughter the adults of a small Nebraska town. Then a young doctor (Peter Horton) and his girlfriend (Linda Hamilton) hit and apparently kill a kid on the side of the road near the town, only to discover that the child’s throat had already been cut.

But once the mob of kids with knives and scythes start stalking the couple, it all gets fairly silly, especially when the demonic monster “he who walks behind the rows” is revealed. 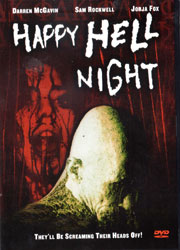 Why does a girl seek out a priest’s advice when her boyfriend is late after a Halloween fraternity prank that sent him to photograph a serial killer who’s been locked in an asylum for 25 years?

Why does the priest immediately blanch, tell the girl to go back to the fraternity and warn everyone to leave and begin “making preparations” when he hears of the prank?

Such “leaps of faith” are a little hard to swallow, but this movie’s psychotic killer is a creepy one, with black alien eyes and a white face. (He’s been surviving on bugs in solitary confinement these past two decades, you see.) While his penchant for two-word pronouncements after each pick-ax murder (“no TV,” “no parking,” “no sex,” etc.) gets old quickly, the movie has its moments.

About midway through it switches from being a ho-hum college slasher to an occult film. It doesn’t always work, but it has its moments — and features an appearance by “Night Stalker”‘s Darren McGavin. 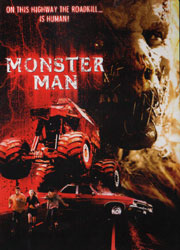 Two buddies who aren’t buddies because they’re fighting over a girl are on the road to see that girl get married. Before you know it, the buddies are buddies again and they’ve managed to irritate a redneck with a monster truck. He’s chasing them down deserted roads where they befriend a mouthwatering beauty who takes their minds off the soon-to-be-married girl.

This is a fun movie that combines road-trip buddy comedy with a growing sense of dread as the buddies realize the “Monster Man” is a serial killer who’s not going to let them go. The ending offers a bizarre, bloody and completely unexpected twist which some will probably hate but I found refreshingly fun. 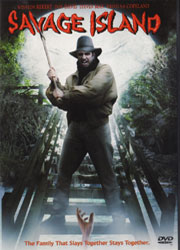 When a troubled young couple take their baby to a mostly deserted island to visit her folks, they have an accident and hit a child on a forest road at night. The next day the child’s family comes to take revenge by demanding the baby in exchange for the dead child.

Things get bloody from there, as the hick family and the rich city family each try to take their pound of flesh from the other.

Imagine “Deliverance” with a Wes Craven edge, shot on grainy digital video and you have some idea of the feel of this one. While initially difficult to watch, as the tension and body count grows, it becomes riveting right until its ironic conclusion.

Cheaper by the dozen 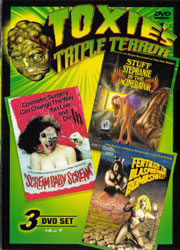 f you’re thirsting for a clutch of really low-budget oddball fare from the ’70s to ’90s, Troma, the folks who brought you “The Toxic Avenger” movies, have just your ticket. The indie video house has unleashed seven box sets of Toxie’s Triple Terror.

Each box offers three DVDs of “lost classics.” Don’t expect any extras or documentaries on these DVDs. They’re often grainy and poorly transferred movies that nobody remembered they’d forgotten. I watched nine of them and didn’t find any that deserved as much as two stars.

For example, Horror of the Hungry Humongous Hungan, a 1992 flick that features a voice-over by Jack Palance, is a half-star Frankenstein-theme film that some high school kids could probably one-up.

Tucked in the same box is Video Demons do Psychotown from 1989, a 1 ½-star flick about a filmmaker who catches the ghostly evidence of a murder as he’s filming in a dead millionaire’s house, thanks to his psychic girlfriend. 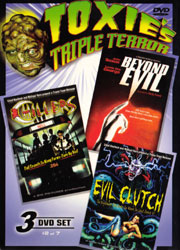 The series also offers Croaked: Frog Monster From Hell, with the sole selling point being it was filmed in upper Wisconsin a couple decades ago by a recent candidate for Wisconsin governor.

Scream, Baby, Scream is the best film of the three boxes of “Triple Terror” that I watched. The ’60s mod film about art students and a macabre artist who sculpts flesh into horrific creations (a plastic surgery horror film before its time!), is worth a view for nostalgia.

Other titles include Fertilize the Blaspheming Bombshell (about a desert cult of Satanists), Stuff Stephanie in the Incinerator (a confusing movie-within-a-movie about spousal betrayal and apparent murder) and Evil Clutch (a weird European film about stranded Americans in Italy that rips off The Evil Dead and offers a demonic bird woman).

These are just the tip of the wave of cult classics finding their way every month to DVD. For more information on these and more titles check the company web sites at www.ardustry.com, www.criterionco.com, www.elitedisc.com, www.image-entertainment.com and www.salvation-films.com.

John Everson is The Star’s Pop Stops music columnist as well as the editor of the new ghost story book Spooks!