Before the coronation of special effects as king, on any given weekend you could go to the drive-in and catch some goofy movie about giant spiders or monsters from the deep that were made on shoestring budgets with bad rubber masks and questionable acting talent. They were called “B” movies. You didn’t go to see them because they were “good” movies. You went because they were fun.

These days, with the rare Blair Witch exception, if a movie doesn’t get made with an effects budget in the tens of millions of dollars, it doesn’t play in theatres at all. Regardless, the low-budget “B” movie circuit lives on. Over the last two decades, a thriving “direct-to-video” market emerged, and these days, that market is quickly changing over to a direct-to-DVD market.  While it’s easy to go out and buy some great big budget Hollywood horror movies to screen at home on your DVD player, you might have to look a little harder if you want to find the kind of fare that you used to see at the Drive-In. Recently, Rhino Home Video (the same folks that brought you all those best of the ‘70s and ‘80s music compilation CDs) put out a handful of older movie titles on DVD. 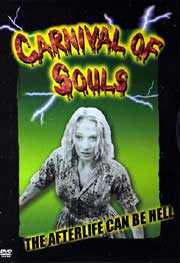 The best of the Rhino lot is Carnival of Souls, a black and white 1962 cult classic starring Candace Hilligoss as Mary, a church organist whose car plunges into a river during a drag race. None of the other occupants come out alive, but while the townspeople are beginning to search the water for the car, Mary emerges unscathed from the river. She is an odd character, an icy but beautiful girl disconnected from nearly everyone around her. After the crash, she begins to be haunted by a man with sunken black eyes and a creepy smile. The illusion of a face on her car window is one of the finest, most eerie moments in this film. She feels a strange calling towards an abandoned pavilion on a beach outside of town, and after a couple of close brushes with the strange apparition, she gives in and seeks out his source, which is apparently centered around the abandoned carnival pavilion. This was a very low-budget film, and the only feature the director ever made. There are no effects here and a minimal script (very little dialogue at all occurs in the first 20-30 minutes), but the whole film exudes a creepy, uneasy feeling. A direct-to-video “remake” was done by Wes Craven’s studio a couple years ago that apparently captured none of the creepy charm of the original. The original has also been released through a couple other companies with “director’s cut” footage that Rhino’s version lacks. If you can pick this one up for under $10, it’s definitely worth a late-night viewing.

Rhino has also transferred a couple of late ‘60s, early ‘70s color horror movies to DVD, though both transfers are littered with film scratches. Dance of Death, a 1968 Mexican horror film which features the last appearance of Boris Karloff, not only has some bad picture scratches, but also has out-of-sync sound and is inaccurately billed on the DVD case as a b/w picture! In it, Karloff  plays a wealthy toy manufacturer who decides to call back all of his heirs to Moorhenge, in order to discover which of them is suffering from the family curse (a madness which leads the sufferer to claw out the eyes of his victims). It’s the classic “will-reading” scenario where one-by-one the benefactors are murdered. There’s not much to recommend about this movie, though a scene with some mindless-yet-macabre marching figures nearly corner and kill one of the lead characters has some strong “creepy” value. Rhino also offers this DVD as part of a boxed set of Karloff films.

Rhino’s other Mexican horror movie on DVD is Crypt of the Living Dead, a 1973 film that was  recut from a Spanish movie about a vampiress who has been entombed for hundreds of years, only to be set free by a man who tries to move her stone casket to retrieve the body of his father, who has been crushed beneath her crypt. The movie plays best if you skip the first five minutes, which give away far too much of the ending and ruin the suspense (as it turns out, I was distracted at the start of the movie, and was able to enjoy the suspense that would otherwise have been ruined). It’s a paint-by-numbers vampire movie, but the ending is well-done, with a moving final scene from the cornered, ruined vampiress. For more Rhino releases, check out www.rhinovideo.com.

There are lots of companies releasing classic B movies on DVD these days. If you check out online catalogues, you can find some rare “mail-order” only type discs. Synapse Films (www.synapse-films.com) offers some European horror titles along with classics like The Brain That Wouldn’t Die and Brain Damage. They also have a couple of documentaries worth checking out —  Dario Argento’s World Of Horror and the George Romero’s Document of the Dead spotlighting two of the more famous makers of horror movies. The folks at Retromedia (www.retromedia.org ) handle a wide range of horror DVDs, from Tempe Entertainment titles (see below) to titles like Giant Spider Invasion, The Mad Monster, Hobgoblins, Dark Universe, Deathmaster, Bride and the Beast and many more. Following are spotlights on two studios that make new cheap horror flicks today:

While all of the above-mentioned movies are reissues of old, often forgotten films, there are plenty of new “B” horror movies made every year. J.R. Bookwalter and his Tempe Entertainment have been making low-budget horror flicks for more than 15 years, sometimes in collaboration with Full Moon Entertainment, which almost singlehandedly created the direct-to-video horror movie market in the ‘90s. Bookwalter started his director’s career barely out of high school in his native Ohio, making a zombie movie with a cast of friends and locals and some backing from director Sam Raimi. The result was a cult classic, The Dead Next Door, a decent late-night B movie that opens with a scientist who has accidentally infected a town with a virus that brings the dead back to flesh-eating life, and turns the living into walking zombies.

Cut to five years later, and the entire United States has become a walking sea of flesh-eaters. The film centers on a small government zombie squad, who are trying to find the original formula for the virus so an antidote can be created (why it took them five years to think of this, they don’t say) There’s a zombie-feeding cult, lots of ketchup-bottle blood and amateur acting. Still, the film has a certain low-budget charm that makes it a fun view.

Likewise Tempe’s Skinned Alive, a kitschy cannibal movie made in 1989 for a whopping $27,000. This one really looks like a low-budget student film; but again there’s a weird creepy charm to it. It opens with a hitchhiker getting knocked off by Crawldaddy, a crippled, masculine woman and her two incestuous, twisted adult children.

They travel the country killing people in order to make cheap leather coats out of them. When their travelling tannery breaks down, they hole up in the basement of a ridiculously naïve couple’s backwoods home, and begin slicing and dicing the locals.

This one watches like Texas Chainsaw Massacre meets Batman, the TV series. Scott Spiegel puts in a great cartoonish performance as a totally over-the-top psycho wearing clothes that The Riddler would have envied.

The best of the latter-day Tempe movies is Witchouse 3, which works well because rather than diffusing the “horror” with humor, it tries to build up suspense with a small cast (including B-movie queens Debbie Rochon and Brinke Stevens) and only a couple of locations. It opens with a woman running away from her abusive boyfriend who stumbles on two friends shooting a documentary about witchcraft.

The trio soon tries out a real séance and brings back the spirit of the witch Lilith, who appeared in the first two films (which are not necessary viewing for this “sequel”).

Strange things start happening and the suspense builds to a nice twist whodunnit ending. Another movie made for under $30,000, this one has some low-budget “cracks” which show, but overall, it’s a good DVD for late night viewing. 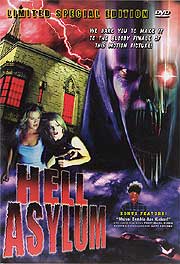 Hell Asylum, which also features an appearance by Stevens and features Tanya Dempsey, one of the leads in Witchouse 3, is less successful plotwise (too much is left unexplained), but packs in plenty of gory eviscerations, when five models agree to stay in a haunted house for the night to film a “reality TV game show.”

Tempe packs its DVDs with lots of extras – including behind-the-scenes interviews and short features that are as interesting as the main titles.

For more information or to order some of Tempe’s releases, check out www.tempevideo.com.

While Tempe’s films manage to avoid the easy sexploitation that seems to go hand-in-hand with the low-budget horror market, New York’s Troma Studios goes to the opposite extreme, combining naked breasts and cheesy gore in nearly every scene.

Troma has a slew of B-movie titles available, obviously shot on much bigger budgets with larger casts than Tempe. Troma made its name back in the mid-‘80s with a cornball superhero horror flick called The Toxic Avenger which you can still find easily on the shelves of your local Sam Goody.

The movie centers around a sleazy health club, where a group of half-naked co-eds plot new ways to go out at night and score “points” by running down innocent pedestrians with their car. When they play a cruel joke on a pathetic janitor, he ends up falling into a vat of toxic waste and turns into a grotesque superhero who takes out criminals in any number of bloody body-slamming, head-crushing ways. And he manages to save and then land a blind girlfriend, who can’t see his deformities.

It all comes together in your typical Frankenstein ending, only in this version, “Toxie” triumphs. There’s plenty of gore and a healthy dose of unnecessarily bare torsos, but it’s all played for laughs.

Over-the-top acting, cheesy ‘80s synthesizer music and Flashdance costuming make this a fun flick to shake your head at. Troma made two sequels and an animated followup to The Toxic Avenger, which you can pickup in a Tox Box set.

All of Troma’s films mix schlocky gore with humor and sex; these are not horror flicks for kids. Some really aren’t films for adults! The studio’s most vile offering – in fact, the most disgusting movie I’ve ever seen — has to be Terror Firmer. Within the first ten minutes you see a woman rip off a guy’s leg and beat him over the head with it, an exploding head, and a woman pick up a guy at a frat party only to strip him and kill him with a bong …afterwards she tosses a chunk of his brain into a frying pan filled with cocaine: “this is your brain on drugs” she quips.

There’s decapitation, machine gun-fast vomit, blood fountaining like it’s coming from a hose, fat naked guys running, nubile women making out with monsters…and it’s all played for campy humor. Terror Firmer is a movie about making a low-budget horror movie (with a blind director), so the “real” serial killer scenes are interspersed with farcical “movie-making” gore. This is really just one gross barf-bag scene after the other, with corny acting and potty humor scattered in between. It’s memorable, though only you can decide if that’s a memory you want.

Troma films are never really scary, just sick.  Check them out, if you dare, at www.troma.com.