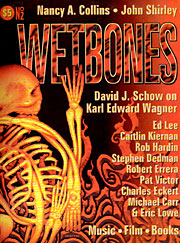 I am the way, I am the light
I am the dark inside the night
I hear your hopes, I feel your dreams
And in the dark, I hear your screams
– Savatage, 1994

It’s raining in my head
but no tears come down
and I’m dreaming of you
Until sleep comes around
– Psychedelic Furs, 1982

It’s all about finding your way through the darkness isn’t it? Seeing through the night, peering past the inner rains, looking for solace in sleep, but hoping that in the helplessness of oblivion, tonight at least, the screams won’t come.

We’re fascinated by the mystery of the dark as much as we’re afraid of it. And the artists who create NightSongs are adventurers, taunters of the terror that lurks beyond. They dare you to step into the ring and have it out one last time with your fears, one bout in the red spotlights of hell…

Last year Cave went over the top with Murder Ballads, a collection of odes to the darkest sin. This time around, he steps away from the gleeful taunts of death and instead, explores the empty, diseased corners of love. There’s no better voice than Cave’s to express the emptiness of lost emotion, the tragedy of human loss, the uselessness of broken life.

Gone is the black glee and  breakneck pace of Murder Ballads. On The Boatman’s Call, the Seeds play somber dirges as Cave speak-sings stanza after stanza of bittersweet story. The evocative tale of “Where Do We Go Now But Nowhere?” is a good example, as Cave’s ambiguous lyrics leave us wondering whether he is victim or murderer:

“I remember a girl so very well
the carnival drums all mad in the air
grim reapers and skeletons and a missionary bell
O where do we go now but nowhere
…Oh wake up, my love
my lover wake up.”

Cave sings of girls from the “West Country,” girls with “Black Hair” and “Green Eyes” and all of these lover’s odes seem more ominous than inviting. Perfect accompaniment to the mystery of the black night.

There are some things that in life are just assumed:

It’s been four years since Ultra‘s orgiasmic predecessor Songs of Faith and Devotion, and while some Mode things have changed, much remains the same. Still at the mic is the soulfully brooding David Gahan, and still writing the songs is Martin Gore. Andy Fletcher rounds out the band, which lost Alan Wilder after the last grueling world tour.

Ultra shows, if not a band in its prime, a band with some kick left. This is,  in some respects, a quieter record than Songs of Faith and Devotion. While it opens with the powerful lead single, “Barrel of a Gun,” a familiar Mode meld of guitars, processed vocals and electronics, much of Gore’s other material for Ultra moves in a moody, ambient mode. One of the best tracks in that vein, “Sister of Night” is an eerie hymn of slow synthesizer slides and Gahan’s near-religious crooning to either a vampire or a fellow lonely soul of the after hours. The smooth guitar picks of “The Love Thieves” back a quiet recitation that, like so many Mode songs, mixes the sacred and the profane:

“Love needs its martyrs
needs its sacrifices
they live for your beauty
and pay for their vices.”

The prelude to “Freestate” opens with what sounds like a filler piece from a movie soundtrack — cyclical synth basslines are topped with xylophone sounds and creaking techno effects. “Freestate” itself is moved by a bluesy guitar line as Gahan trots out images very familiar to Mode fans:

“I can hear your soul crying
listen to your spirit sighing
I can feel your desperation
emotional deprivation.”

And that encapsulates probably the biggest complaint you could make about Ultra. It’s all very familiar. Lyrically and sonically this is a comfortable, logical continuation of Songs of Faith and Devotion. After four years, you might expect a little more than that.

The only song here that sounds remotely like a stretch from the last couple of Mode releases is “Home,” and only because it finds Gahan sounding more like Bryan Ferry than himself. But the sad, solemn string orchestration marks this as a firm followup to the last LP’s “One Caress.” Likewise, “It’s No Good,” one of the few upbeat danceable tracks on the disc features a bassline and chorus sound straight out of Faith‘s “Walking In My Shoes.”

Familiar or not, it’s hard to deny the bittersweet allure of Depeche Mode’s trademark mix of soul, electronics and just the right dose of dourness. Ultra is a little low on spark when played song for song, end to end…but sometimes that’s exactly how Mode fans like it.

There’s a really good album hidden in Animal Rights. You just have to look to the right and left of the thrashy industrial rants. The 16-track disc is divided almost equally between psychotic fests of distorted vocals and frantic guitars and ambient, electronic mood pieces. Garage bands have done the industrial thing better, but the instrumental tracks are beautifully melancholic. If you sequence this album to dismiss all the vocal tracks, you’ll have a suite of songs perfect for playing in grey English gardens and rainy funerals.  Cellos and acoustic guitars weep with pianos and synthesizers to create sweeping, sighing soundscapes that cry of loss.

Featuring the vocals and lyrics of John Shirley (who wrote the novel this magazine is named after), The Panther Moderns is an independent act that melds an ’80s guitar and keyboard attack with a dark sensibility. The influence of Shirley’s better known profession is easily heard on  “Hope There’s A Hell,” “Mountain of Skullz,” and “See You In Black.”

While, for the most part, this disc doesn’t go anyplace new musically,  it’s a trip to hear Shirley’s Iggy Pop baritone croon and cackle darkly around the twine of guitars and drums. There’s funky guitar riffery on the humorous rapspeak of “Not Who I Am” and the album’s best (and most purely Shirley) track uses instruments only for atmosphere: “Dominant Impulse” is a creepy answering machine monologue about a group of freaked out murderers among the drugged up X set.

With a CD cover featuring photos of the U.S. flag mixed amid illustrations of early ether adminstration and the piercing of an eyeball by a medical probe, you can bet this is going to be an intense ride. And it is. It opens with a series of “newsclip” soundbites, including the following caution:

“Even its most enthusiastic sponsors concede that the administration of an electric shock through the skull is a comparatively crude assault on the underlying brain.”

Feeding The Future is definitely an assault, but if you’ve got a soft spot for rampant guitar riffing and a touch of Nine Inch Nails attitude, you’ll mosh along to at least the first handful of tracks. Things fall apart after that melodically, but The Cult-meets-molten-metal slide of “Unexpected Ways” (“Sometimes you scream so loud, you have to take a stand/I have paid in unexpected ways, I have paid enough”) is worth buying this CD for all on its own. Angry, brooding, and often sharp as a dentist’s drill, Feeding The Future offers great grist for the dogs of the dark.

Here’s something that should never happen: four cellists covering Metallica. This  is a silly exercise in stretching the limits of instruments and good sense. The cello was simply never designed to be a good lead instrument, and the cellists’ attempts to recreate the dark urgency of Metallica rarely come close to gelling.

The album leads off with one of its most unsuccessful attempts, “Enter Sandman,” which sounds as if the instrumentalists are struggling just to create a hint of the melody while sustaining a chugging ominous back riff. More successful are “Master of Puppets” and “The Unforgiven,” which make decent use of the cello’s natural melancholia.

This is for Metallica stalwarts and those who enjoy musical humor (not necessarily intentional).

That’s all for this collage of NightSongs.