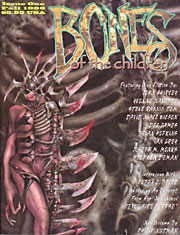 Originally Published in Bones of the Children
Fall 1996

Take the skin and peel it back
now doesn’t that make you feel better?
…the pigs have won tonight
now they can all sleep soundly
and everything is all right
– Nine Inch Nails, 1994

They used to dance in the garden in the middle of the night
they were naked as the day they were born
skin all bone-china white
O you were a vampire and I may never see the light
– Concrete Blonde, 1990

The music of the night comes in many guises. NightSongs are seductive as a slender succubus, singing sweetly of dark decay, waiting for that moment of your acceptance, your trust, your aural orgasm. Then the music is a mantis, biting off your head with a spray of bitter venom and quickly cooling blood. You’re caught, you’re killed. And you’ll keep coming back for more.

The music of the night is goth, industrial, alternative, ballad, middle eastern. It exists in tiny bars in Dusttown, USA and it blares from the amplifiers at Wembley stadium. NightSongs know no genre boundaries. They live to feed on your soul. They are Tori Amos recounting rape and the death of dreams. They are This Mortal Coil’s ethereal weaving of tape loops and unspecific sorrow. The music of the night lives in the angst of a mosh and the mesmerizing twine of a druid dance. In this column I will dive into the blasted pits of its excess and wade in the black syrup of its cloyingly attractive deception.

NightSongs are the blackest dreams of our communal nightmare.

Taste the blood. Catch the scent of the other side through the cool fog of dry ice.

In the Music To Hold A Seance To category we get The Changelings’ self-titled album. The Atlanta band’s debut on Middlesex came out in May, and features an intoxicating blend of somber, instrumental violin with a hypnotic stomp of percussion, guitars, keys and female trance chanting.

Working in the same school as Dead Can Dance (but with a more enchanting darkness), Regeana Morris’ sensual, mysterious vocals are simply spellbinding. Like Cocteau Twins’ Elizabeth Fraser, her lyrics are often incomprehensible, but with The Changelings, it’s the feel that matters. And the feel here breathes of the night call of the crypt, and of secret dances at the altars of ancient stone.

(This independent release may not be easily available in your local record store. Write to P.O. Box 5583, Atlanta, Ga., 31107, or check out their WWW site at www.changelings.com)

Nick Cave has made a career out of singing about the shadowed corners of the human heart. His latest album puts a gold-gilt golgotha frame around the crimson-stained hands of murderers. Each of the 10 tracks here paint the portraits of “murder most foul,” and most, in thoroughly twisted fashion, are told from the point of view of the murderer through Cave’s creepy bass timbre. A handful of these songs are traditional ballads, their bloody tales amplified by the Bad Seeds’ edgy arrangements and Cave’s hellish delivery. Others were written in old-fashioned ballad format by Cave himself.

The opening dirge is a Cave original, “Song of Joy,” in which a cold homeless man recounts the stabbing deaths of his family while begging shelter for the night. The song cleverly leaves the listener wondering if the growling narrator is, himself, the serial killer of the tale who quotes Milton on walls with his victims’ blood. Will the listener let him in?

P.J. Harvey joins Cave on “Henry Lee,” a traditional ballad about a woman with some real claws — she kills a man that won’t have her, rather than letting him go back to the girl he loves.

But the album’s true bloody gems are “Where The Wild Roses Grow” and “The Curse of Millhaven.”

In “Where the Wild Roses Grow,” Cave cannily draws in Australian pop queen Kylie Minogue to lend a heavenly voice to the warped tale of a man whose mother told him “all beauty must die.” Cave and Minogue trade off lyrics recounting their courtship and his “necessary” murder of her beauty, atop a bittersweet arrangement of strings and piano.

In “The Curse of Millhaven,” Cave spins a blackly humorous, frenetic tale of a teenage psychopath named Loretta, who has a similar problem to that of the murderer in “Where the Wild Roses Grow.” She recalls that: “Mama often told me we all have to die.” Over a punchy, carny organ and skewed polka beat, Cave, as Loretta, brags of  multiple murders with glee:

“A lot of people were saying things that made little sense
Then the next thing you know the head of Handyman Joe
Was found in the fountain of the Mayor’s residence
Foul play can really get a small town going
la la la la, la la la lie
All God’s children all have to die.”

There’s a military beat-driven hymn to a Mary Bellows, who did not find long life as a benefit of “The Kindness of Strangers,”  a violent, R-rated run-through of the traditional “Stagger Lee,”  and a step-by-step recounting of the cold-blooded murders in “O’Malley’s Bar” that, at 14 minutes, stretches the limits of listener patience somewhat. (“O’Malley’s Bar” was a song that wouldn’t fit on a “normal” Cave album, however, and became the impetus for recording a whole album of Murder Ballads.) The album is capped off in darkly wry Cave fashion with a “punchline”:a foreboding, piano-driven version of Bob Dylan’s “Death Is Not the End,” on which Cave is joined by Minogue, Harvey and ex-Pogue Shane MacGowan.

Released this spring at the same time as a housecleaning two-disc collection of old Skinny Puppy demos (Brap), The Eyes of Stanley Pain is a natural extension of Canada’s prototypical industrial dance band. Featuring cEvin Key and Ken Marshall of Skinny Puppy, Download listens like a cyber passion play of hellish sounds and percolating pain. Thumping bass and drum machine rhythms underscore twisted, maniacal processed vocals (this is how demons sound when they speak, isn’t it?)

The old Skinny Puppy fondness for grafting newsbites atop frantic synth tracks on Brap sounds dated  next to the complex sonic explosions of Download. Intense and challenging, The Eyes of Stanley Pain is a mind-numbing headphone album. Put it on, let it eat away at the synapses between the ears. And then, as the bombs fall, the blood boils, the synthesizers flutter and the demons cavort amid the destruction, you may see with The Eyes of Stanley Pain.

If some music romanticizes the call of the dark and the dank breath of death, this compilation paints death and brutality in a blood-and-uncoiled bowel realism that is both frightening and, in its own way, alluring. Home Alive is a benefit album that was released early this year on the theme of violence against women. Its songs and spoken word pieces take on the brutality of the street and the home in a confrontational and effective burst of sonic energy.

A two-CD set, it includes a horde of well-known Seattle bands like Nirvana, Pearl Jam, The Presidents of the United States of America, Soundgarden, The Posies and Heart’s Ann & Nancy Wilson. There are also a slew of lesser known punkish outfits, including The Gits and Mia Zapata, the former lead singer of The Gits who was raped and killed in 1993. The album was masterminded in part by her former bandmates.

The most intense tracks on Home Alive actually come, not from the punk and grunge rockers, but from performance artists. Spoken word pieces that range from the sadly humorous to the grittily frightening are scattered throughout the set from artists like Jello Biafra, Jim Carroll, Lydia Lunch and more. These often chilling poem-stories about rape, violence and misogyny are more riveting than most horror fiction and are sometimes difficult to listen to due to their frightening depth of emotions.

Martha Linehan’s “Mary’s Poem” is a rape recount that is more gut twisting in its realism than the grimmest serial killer fiction I’ve read:

“This is Texas, could be anywhere I suppose, but I live here. This is my apartment. My room. My world. This is my bed. This is no longer my body though. This is not me. He is raping her. Then he will kill her, just like he said. I am speaking through her stomach. I can see him through her navel. I am her twin. Her nails cannot break the skin; hands bound with rope he found right on the porch. Her gagged mouth cannot scream. Blindfolded, she will never know what he looks like. But she’ll imagine for a long, long time that every man is him.”

The messages of Home Alive should be heard by everyone, of both sexes. Some horrors should exist only in fiction.

That’s all for this issue. Keep listening. The heart of NightSongs beats hardest in the dark.