Home Beer Snob A Working Trip to Paradise (as in Paradise Island, Bahamas)

A Working Trip to Paradise (as in Paradise Island, Bahamas) 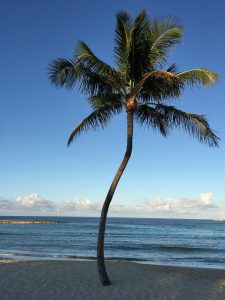 ANYONE WHO FOLLOWS me on Facebook or reads by blog frequently knows that my dayjob sends me on a lot of business trips. I’m working most of the time on these jaunts, but I am privileged to see different locales, even if only for short dinner outings outside the hotels. I’ve been to lots of typical cities (L.A., San Francisco, Seattle, New York) and some exotic outings (Kauai, Chile, Germany). But one of the most picturesque was last week’s trip to Paradise Island, Bahamas. We were at the Atlantis Resort, which takes up a third of the island and is like a giant water park – there are swimming pools and lazy river routes and slides everywhere, not to mention small outdoor pools with dolphins, manta rays, sharks and more all around the grounds.

It was funny because over the past few days since I returned, I keep seeing TV ads for the resort and pointing and going “hey, I was just walking there…”) Considering the resort was surrounded by beach, and I’m pretty much an ocean junkie, I was really looking forward to getting a few dips in the saltwater… but unfortunately, the winter storm that was killing the northeast also sent some gloom and cool breezes to the Bahamas… so while being there was a whole lot better there than it was in Chicago, I didn’t get in the water much. I did get out a couple times, and swam with some damsels and wrasses and other fish near the shore. And I had some good dinners — and also the most outrageously overpriced dinners I think I’ve ever had. 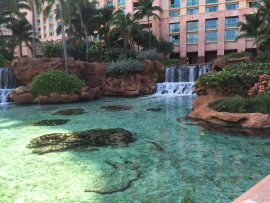 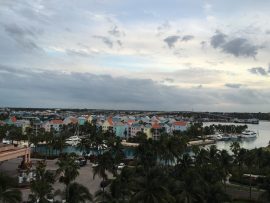 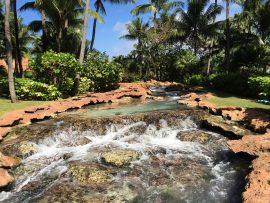 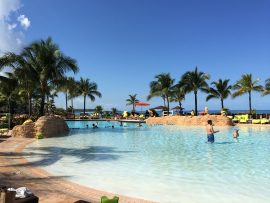 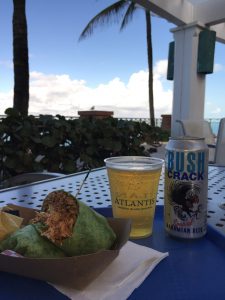 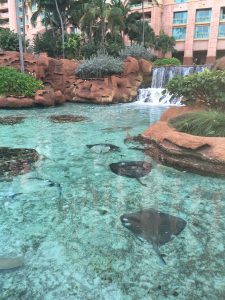 My first night there, I walked a ways to find a reasonable restaurant, only to find it closed… and so, since I was starving after a 10-hour travel day, I ended up at the Seafire Steakhouse, having perhaps the most expensive steak dinner I’ve ever eaten (and it was the cheapest on the steakhouse’s menu!)

I quickly learned that night and in the following days that there are no IPA’s imported to the Bahamas… everything there is light pilsner beer (Corona, Bud) and most is brewed by the Bahamian Brewery (except Kalik, probably the most popular beer there). There is one amber ale brewed by Bahamian specifically for Atlantis, which is drinkable, but other than that… I wasn’t too excited by the omnipresent Sands, High Rock and Bush Crack beer, though you gotta like the name on that last one.

On the 2nd night of my trip I found that even 4-star hotels in the tropics can’t keep all the nasties out… I found this lil bugger sniffing my dirty laundry in the hotel closet. A bug perve!

He met his untimely end at my hand thanks to a dry cleaning sign that happened to be handy in same closet, after running up and down the walls a time or two. His little feelers were still twitching, so I brained him with cake of soap and then collected him on the cardboard of a soap box and left his nosy carcass in the hallway… a warning to other tenants: Paradise is not bereft of cockroaches!

After having a late lunch of conch salad and a couple beers that cost $50, I decided to try to find some more affordable food and have dinner in Nassau.

The only problem was… the hotel didn’t offer shuttle service to the larger island, and I wasn’t keen on cabbing it. At least not both ways. So… I put on my walking sandals and began my one big adventure of the week.

As it turned out, I had to walk five miles, but I ended up at the only British Pub in Nassau, Bahamas. At least according to Google.

The Cricket Club wasn’t much to look at, but it did sit overlooking a cricket field and they served my beloved Newcastle! The only good beer I had on my trip!

I eschewed the Bangers and Mash for a local plate of barbecue chicken, beans ‘n’ rice, plantains and cole slaw. It cost 1/3 the price that it would have across the bridge and was one of the best meals I had there. 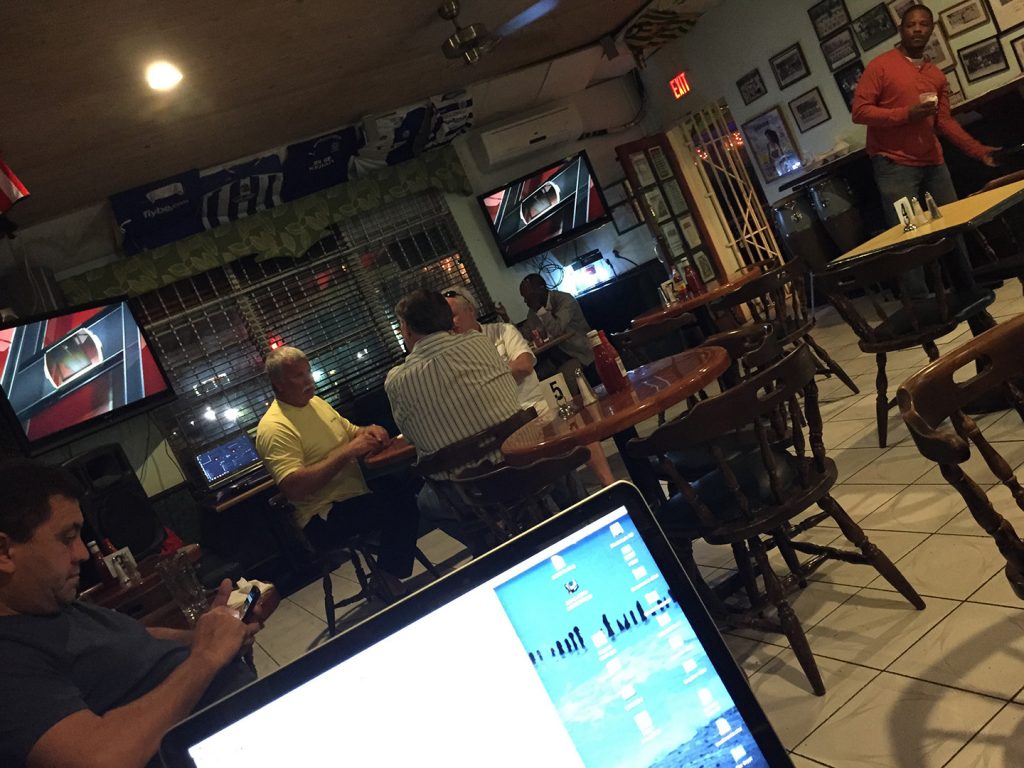 The start of karaoke night at the Cricket Club put an end to my writing night, and I headed out across the street to the “Fish Fry” district of restaurants. They looked fun – lots of fish fry shacks along the ocean. But I didn’t have a chance to get back there over the next few days. I also didn’t walk the 5 miles back across the bridge; I broke down and caught a cab.

One big downside of this particular trip was that it was held over the same week as the Cub Scouts’ annual Pinewood Derby. Shaun and I built his car before I left, but I was bummed I couldn’t be there to see the race.

Still, he continued his streak of winning “Creative” awards for his Pinewood Derby Car. This was the 4th “video game” car I’ve helped him build for the Derby (following Angry Birds, Minecraft and Dragonvale) and while we’ve never built the fastest cars… they hold their own. On Jan. 23rd he placed 2nd, 2nd, 2nd! 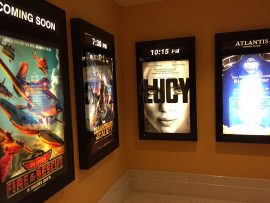 I was on Paradise Island for a solid week – Tuesday to Tuesday – but the days flew by pretty quickly, since I was working most of the time… and the weather, as I noted, wasn’t exactly what you’d hope for. Plus, they close the beaches and outside pools and bars there at 5 p.m., so I was holed up inside a lot more than I expected. I watched a couple movies in my room, and saw Lucy in the hotel theater one night.

I had been hoping to get more writing done there than I did… but I got in a little, at the Cricket Club and at the bar of the Todd English restaurant Olives (wasn’t impressed with their expensive flatbread, I have to say!). Next to the steak and the Cricket chicken, I think my best meal was right at the end of the trip — I had the most artistic-looking highbrow Chile Rellenos at Bobby Flay’s fancy southwestern Mesa Grill. 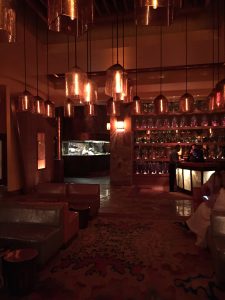 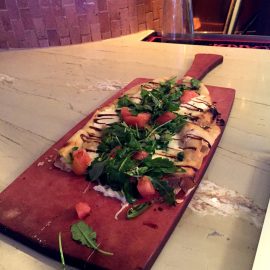 The whole time I was there, I was wishing my family could have come on this trip to enjoy the resort while I was working… but it just wasn’t to be this time. At the end, I was really happy to finally board the plane home. Paradise is beautiful, but you don’t want to be there alone! 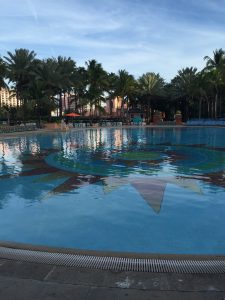 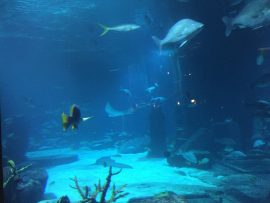 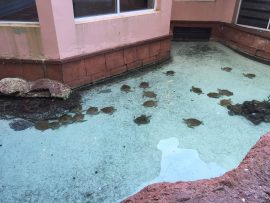 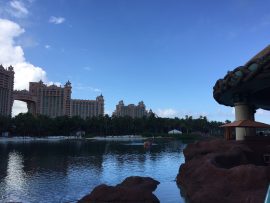 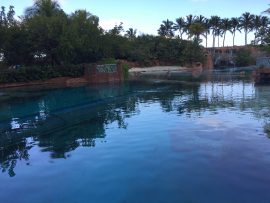 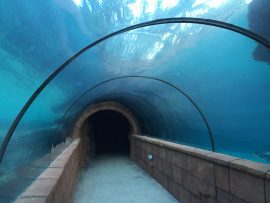 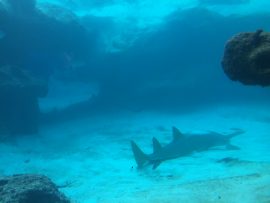 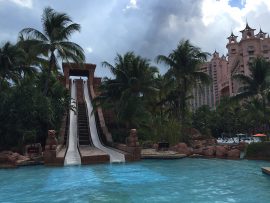 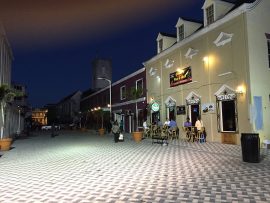 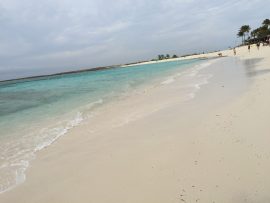 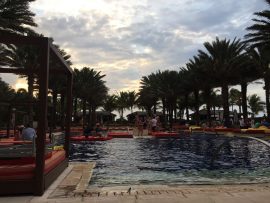 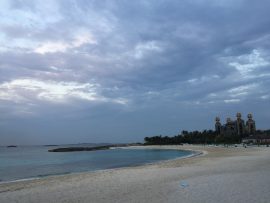 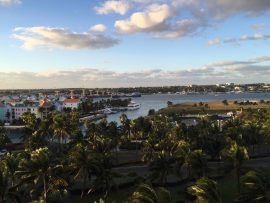 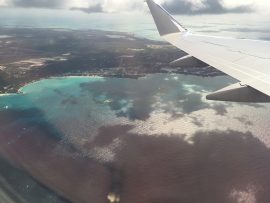